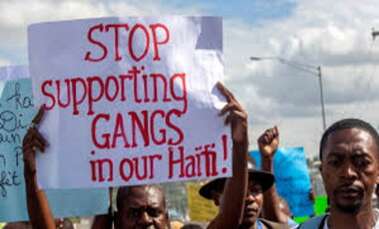 WASHINGTON (CMC) – The Biden administration in the United States is reportedly pushing legislation that will lead to sanctions against gang leaders in Haiti following an escalation in violence in the French-speaking country.

During the ongoing 77th United Nations General Assembly in New York, the United States is preparing to circulate a resolution in the United Nations Security Council on Monday setting out a new framework for sanctioning Haiti, according to a report published by the Miami Herald gang would create leaders.

The article also states that the Biden administration does not rule out international intervention.

In a recent interview, Assistant Secretary of State for Western Hemisphere Affairs Brian A. Nichols said that gang leaders who are fueling Haiti’s worst security crisis in decades — and those who fund and support them, including the supply of firearms — “are in the crosshairs , and your actions to destabilize Haiti will be met with international travel and financial sanctions.”

The Biden administration is hoping for a speedy passage of the resolution “in the coming days,” Nichols said.

He said the resolution will create a United Nations framework to impose sanctions on gang leaders and those who support, facilitate and fund their activities.

“These sanctions would target their financial resources and their ability to travel,” the US official said.

The Haitian government has all but lost control of security in the Caribbean nation, and US officials say the country has reached a crisis not seen since the early 1990s.

According to the Miami Herald, Haiti’s neighbors have called for decisive action from the United States and other permanent members of the Security Council.

So far, the neighboring Dominican Republic has publicly called for the return of a multinational peacekeeping force, arguing that Haiti’s instability and rampant gang violence are becoming a growing threat to the region.

This would require Haiti to fall again under what is known as Chapter 7, an article of the UN Charter that allows the Security Council to use international forces in a peacekeeping mission.

After 13 years, it ended in Haiti in 2017 when the UN Security Council, urged by the United States and others, finally withdrew its military and peacekeeping operations in Haiti.

According to Nicholas, if the Haitian government asks for this assistance, “the international community would certainly consider such a request.”