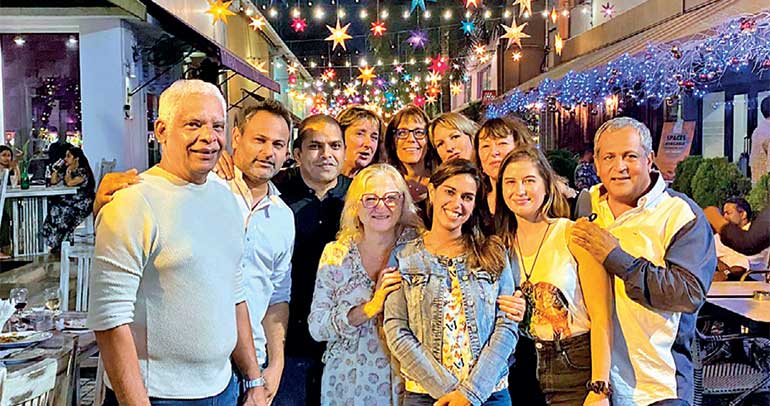 A group of leading travel agents from Switzerland invited by “Let’s Travel” toured the city of Colombo and witnessed the night life over the weekend. Here are some of the travel agents in Park Street Mews with Tourism Minister Herrin Fernando. Senior restaurateur Harpo Gooneratne and SLCB chairman Thisum Jayasuriya are also present

The tourism industry is off to a promising start in December, with average daily arrivals exceeding 2,300 compared to 1,900 in November, marking the highest since April.

The first week of December arrivals also pushed the year-to-date total to 644,168, raising expectations among the tourism industry for a good start to the winter season which runs until the end of March 2023.

The arrival of the luxury cruise ship, Azamara Quest, the renewal of many new international airlines and charter flights, as well as the global promotions at ITM Paris, Indian and WTM were the main reasons for the favorable pickup arrival figures.

Tourism earnings in the first eleven months were $1.12 billion, reflecting a 313% increase from the same period last year affected by COVID-19.

Sri Lanka has lost over $10 billion in foreign exchange earnings, which generate over $4.3 billion a year, due to the epidemic over the past two years.

Maldivian tourist arrivals cruise to pre-Covid levels despite no Chinese

Despite the absence of visitors from China, the Maldives welcomed over 1.5 million holidaymakers, returning to pre-Covid levels.

The Maldives Ministry of Tourism said that over 1.52 million tourists were welcomed as of December 7, mostly by Indian travelers.

The target set for tourist arrivals by the island nation per year is 1.6 million.

According to the monthly statistics, India ranked the top source market with 209,725 passengers reflecting 14% of total arrivals in November, followed by Russia, the UK, Germany and Italy.

It also showed that the average daily arrival was 4,465 as of November 30, while the average stay was eight days.

In 2019, the Maldives received a total of 1.70 million tourists, while 16.7% were traveled by Chinese travelers.

In 2020, total arrivals to the Maldives dropped significantly to 555,494 as a result of the COVID pandemic and it gradually recovered to 1.32 million last year.