LONDON, United Kingdom (AFP) – Hundreds of foreign royals and heads of state are expected to attend the funeral of Queen Elizabeth II in London on Monday – one of the largest diplomatic gatherings in decades.

According to reports from the BBC and Sky News, Westminster Abbey can accommodate around 2,000 people, around 500 heads of state and foreign dignitaries and their partners are expected.

king of the world

A host of royals from Europe and beyond have confirmed their attendance at the funeral for Britain’s longest-serving monarch.

Japan’s Emperor Naruhito and Empress Masako will attend – their first trip abroad since ascending the throne in 2019. The visit marks a departure from Japanese tradition, in which the emperor rarely attends funerals. 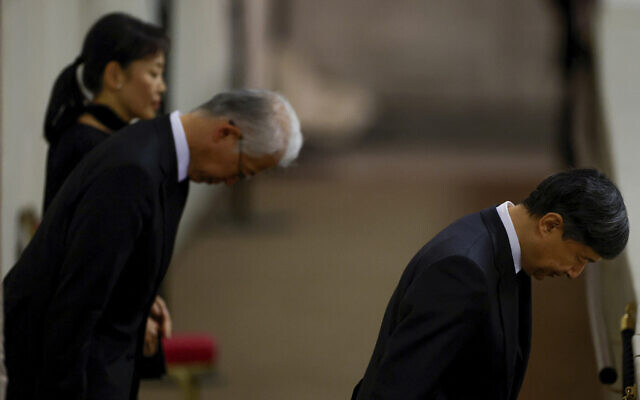 Japanese Emperor Naruhito, right, pays his respects to the coffin of Britain’s Queen Elizabeth after her death during her representation at Westminster Hall in London September 18, 2022. (John Sibley/Pool via AP)

The royal families of Europe are closely related after centuries of intermingling their bloodlines, so it will come as no surprise to see multiple monarchs across the continent.

King Harald V of Norway, Prince Albert II of Monaco, King Willem-Alexander of the Netherlands, King Carl XVI of Sweden Gustaf and Philippe, King of the Belgians, will all be present.

Also arriving is Denmark’s Queen Margrethe II, who has canceled a series of events to mark her 50th anniversary following the death of her third cousin, Queen Elizabeth.

Spain’s King Felipe VI. will be there with his wife Queen Letizia. So did his father, the former King Juan Carlos I, who fell out of favor in 2014 and now lives in self-imposed exile in the United Arab Emirates. 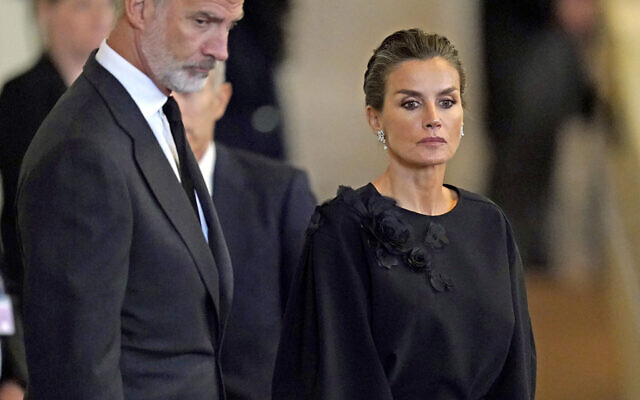 King Felipe VI (left) and Queen Letizia of Spain look at the coffin of Queen Elizabeth II as it lies on the catafalque at Westminster Hall on September 18, 2022 in London. (Jacob King/Pool Photo via AP)

Mohammed bin Salman, the Crown Prince of Saudi Arabia and its de facto ruler, has been invited but it has not yet been confirmed if he will attend.

He was due to hold talks with British Prime Minister Liz Truss on Sunday, despite international outrage over the 2018 killing of journalist Jamal Khashoggi in Turkey by Saudi agents.

US President Joe Biden and his wife Jill headed the diplomatic guest list and flew to the UK late Saturday to also pay their respects at the coffin on Sunday.

Unlike some other leaders, who have been asked to arrive on British government-arranged buses, Biden has reportedly been given permission to use his armored presidential limousine, known as The Beast. 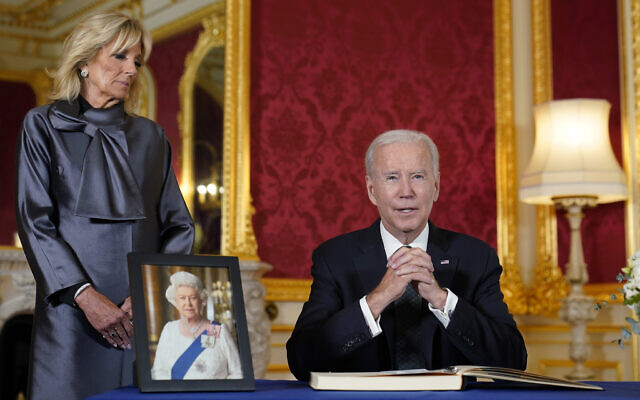 US President Joe Biden speaks after the signing of a book of condolence at Lancaster House in London following the death of Queen Elizabeth II September 18, 2022 while First Lady Jill Biden looks on. (AP Photo/Susan Walsh)

French President Emmanuel Macron will attend, the Elysee Palace said, to show the “unbreakable” link with Britain and pay respects to the “eternal queen”. He is also among the leaders allowed to use their own transport, British officials said.

Olena, wife of Ukrainian President Volodymyr Zelenskyy, is likely to attend after visiting the Queen’s coffin at Westminster Hall on Sunday. 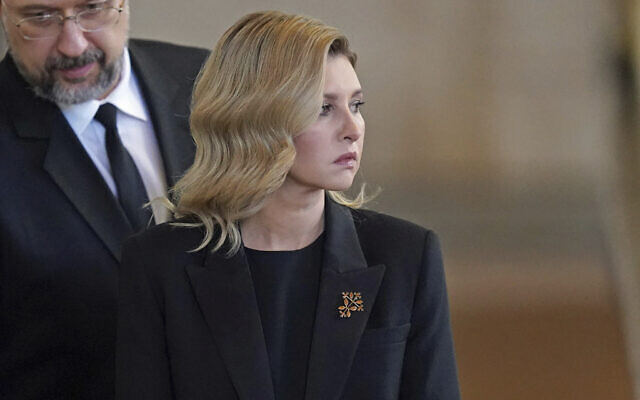 Ukraine’s First Lady Olena Zelenska looks at the coffin of Queen Elizabeth II which lies in state on the catafalque in Westminster Hall at the Palace of Westminster, London September 18, 2022. (Jacob King/Pool Photo via AP)

China will send Vice President Wang Qishan at the invitation of the British government. 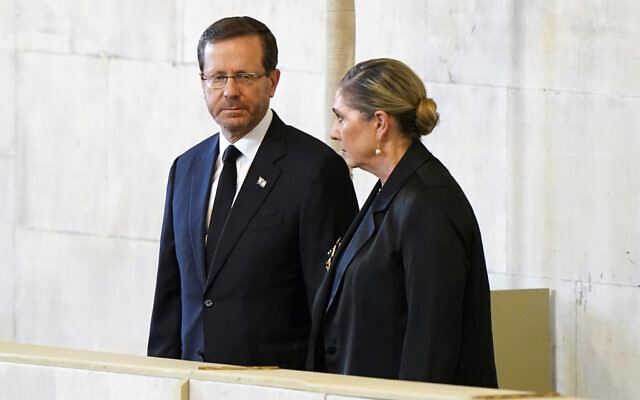 President Isaac Herzog looks at the coffin of Queen Elizabeth II which lies on the catafalque in Westminster Hall at the Palace of Westminster, London September 18, 2022. (Joe Giddens/Pool Photo via AP)

Other heads of state at the funeral will include Presidents Isaac Herzog of Israel, Sergio Mattarella of Italy, Frank-Walter Steinmeier of Germany and Yoon Suk-yeol of South Korea.

In a symbolic move to pay tribute to the Queen, whose 2011 state visit to the Republic of Ireland helped heal decades of tension over Northern Ireland’s position in the UK, Irish Prime Minister Micheal Martin will be present.

Numerous heads of state and government will come from countries where Queen Elizabeth was head of state. 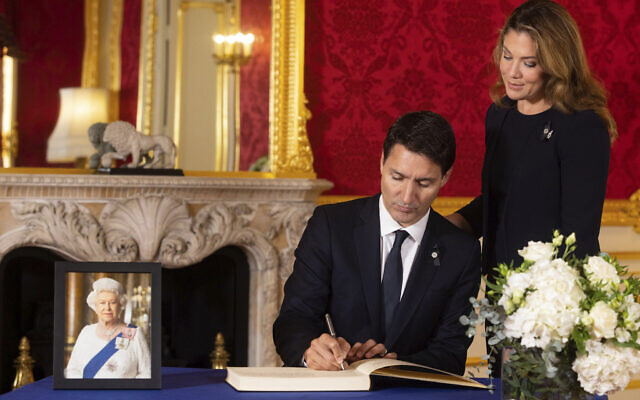 Canada’s Prime Minister Justin Trudeau signs a book of condolence for the late Queen Elizabeth II alongside his wife Sophie Trudeau at Lancaster House in London on September 17, 2022 (David Parry/Pool via AP)

Leaders will also come from other states in the 56-nation Commonwealth, of which Queen Elizabeth was the symbolic figurehead.

Due to strained relations, Britain has opted to invite ambassadors rather than heads of state from several countries – Iran, Nicaragua and North Korea.

Russia and Belarus are among a small group of nations excluded altogether after Moscow invaded Ukraine.

Russian President Vladimir Putin – who is banned from traveling to the UK due to sanctions – had already announced he would not be attending.

But not inviting a Russian representative to the Queen’s funeral was “particularly blasphemous towards the memory of Elizabeth II” and “deeply immoral,” the Foreign Ministry spokeswoman said in Moscow on Thursday.

Russia and Belarus have embassies in London, and their presidents sent King Charles III. messages of condolences.

Other countries without invitations include Myanmar, Syria, Venezuela and Taliban-ruled Afghanistan.