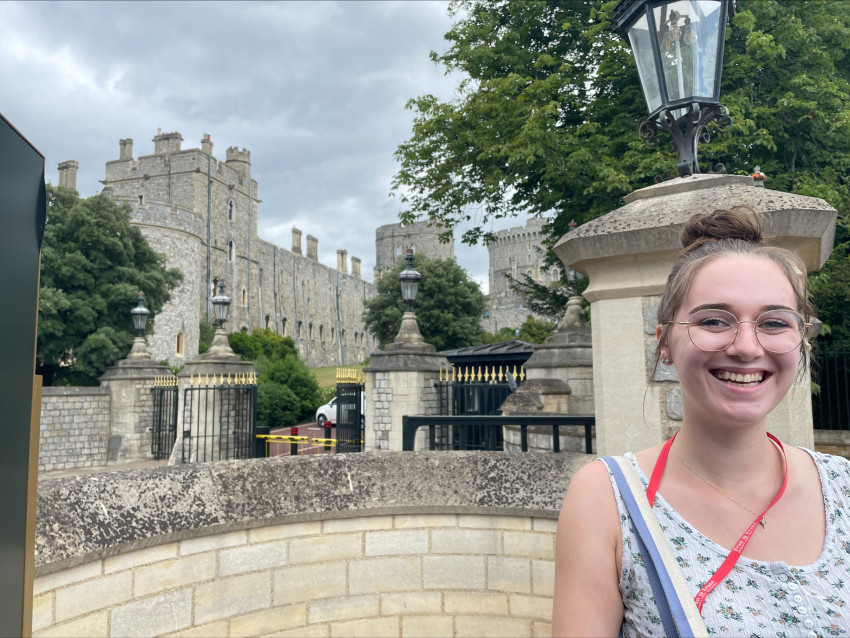 Abbie Lindblade visited Windsor Castle while in the UK on an internship.

KALAMAZOO, Mich. – The death of Queen Elizabeth the second sent waves across the globe, including for Abbie Lindbladea political science student at Western Michigan University.

“I’ve had an interest in the British monarchy for a long time. When I was in high school, I read a lot of books about the different houses of the royals, and I’m a big fan of ‘The Crown,'” she says.

It’s one thing to read about the world and foreign policy; it’s another thing to see them up close.

“I toured Windsor Castle in June when (the Queen) was home and she was out on horseback just the day before,” says Lindblade. “I definitely feel a little more personally connected now that I’ve seen where the monarchy resides.” 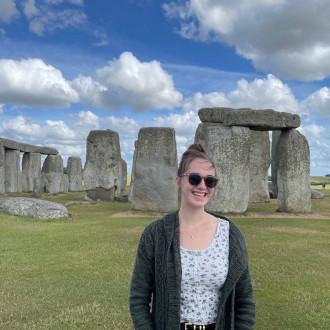 Lindblade was able to immerse herself in British culture and travel around the UK over the summer while doing an internship with an international organization through a Gilman Scholarship supported study abroad program. The competitive scholarship program offers up to $5,000 for students on Pell federal scholarships—many of whom may not otherwise have the funds to explore the world—to undertake internships or take courses abroad.

“Study abroad is one of the most impactful and transformative learning experiences in a college student’s academic journey,” he says dr Paulo Zagalo Melo, Associate Provost for Global Education at Western. “There is extensive research from several US universities showing that studying abroad has a positive impact on retention, time to graduation and GPA progression rate. In addition, global and intercultural competence are skills that are increasingly valued by employers .”

The most influential part of Lindblade’s study abroad experience, she says, was her internship. She worked at The PIE News, a resource for international education professionals.

“The internship was just amazing. I feel like I’ve had so many really cool experiences and really built my portfolio,” she says. “It really opened my eyes to what a journalistic environment would look like and feel like; I really strengthened my writing skills.”

Lindblade had published more than a dozen articles and was even given the opportunity to freelance for the company in the future. She also helped launch a TikTok channel and advised company executives on expanding its digital presence.

“I really realized that writing is one of my best skills – writing, reading and analyzing,” says Lindblade, who is expected to graduate in spring 2023 and is beginning to think about potential career options. “Now I’m really trying to find jobs where I can focus on writing.”

She also took the opportunity to explore London and the rest of the UK while she was there, creating memories that will stay with her forever and catching the travel bug that is already driving her to future adventures to plan.

“I saw Buckingham Palace and Baker Street. I did a day trip and saw Bath, Stonehenge and Windsor Castle. I’m a history nerd, so that was really great,” she says. “In my last week abroad I took a 2 day trip to Edinburgh, Scotland and we stayed in a really cool hostel right by Edinburgh Castle, hiked up a volcanic caldera and walked all the way down the Royal Mile. And it was incredible.”

All Gilman Fellows complete a follow-up service project upon their return home. Lindblade plans to focus on providing study abroad opportunities to students at Kalamazoo Public Schools (KPS), the district she attended. 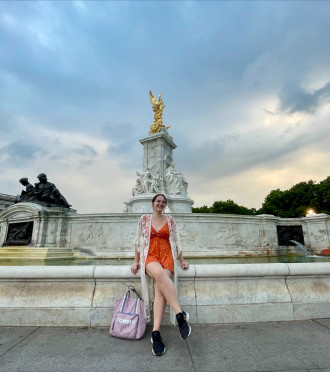 Lindblade stops for a photo at the Victoria Memorial in front of Buckingham Palace.

“Like my family, many of the children at KPS have a low income. So it was really cool to see that there are scholarships specifically for us to study or do an internship abroad,” she says, acknowledging the gift of the Kalamazoo promise of tuition relief. “I want them to know that they still have opportunities. They don’t have to give up experiences simply because they think they can’t have them. You just have to put in a little effort to make those grant applications and put yourself out there.”

Exploring ways to engage students worldwide is a top priority at Western, and the Haenicke Institute for Global Education continually works to ensure all Broncos have an equal opportunity. A few years ago, study abroad grants were switched from solely merit-based grants to financial need-based ones.

“We also opened up the first year of the Global Engagement Program to all students free of charge,” adds Zagalo-Melo. “Justice in global engagement is in line with the vision and mission of the university and the concept of ‘global learning for all’.”

“I’ve had a lot of support from Western,” says Lindblade. “I don’t think I would have been able to make this journey and these experiences without the Haenicke Institute. You are definitely one of my biggest supporters.”

Now, Lindblade takes the opportunity to pass on that support.

“I just want KPS students to realize that the thought of college can be scary — it’s a big deal. You have to put in a lot of work. But you also learn to be yourself and grow,” she says. “It’s an amazing experience.”

Applications for the Gilman Scholarship are accepted Thursday October 6th.