Barcelona are back in La Liga on Saturday night when they travel to the Iberostar Stadium to face Mallorca.

The Blaugrana have made an impressive start to the new season, winning five and drawing one in their first six games. They are second in the table and beat Elche 3-0 at home before the international break.

With October’s games tight and fast-paced, Xavi Hernandez will want to continue the winning streak and pick up all three points against Mallorca.

Barcelona’s injuries are piling up and coach Xavi Hernandez was dealt a fresh blow when Hector Bellerin suffered from calf pain during Tuesday’s training session. Bellerin is not available for selection for the forthcoming league game, the club’s official website confirmed.

Also Read :  Ignore the experts – this is the perfect time to visit a vineyard

Memphis Depay and Frenkie de Jong suffered hamstring injuries in the Netherlands’ 2-1 defeat by Poland in the Nations League last week. Jules Kounde suffered a similar fate when he was taken off after 23 minutes with a thigh problem in France’s 2-0 win over Austria.

Meanwhile, Ronald Araujo underwent successful adductor surgery after the defender sustained the injury during international duty for Uruguay last Friday. Araujo is out for the foreseeable future but Xavi will welcome Ousmane Dembele and Sergi Roberto back for the weekend’s clash in Mallorca.

Expected line-up of Barcelona vs Mallorca (4-3-3)

Marc Andre ter-Stegen has conceded just one goal in six games which shows his current form. The German is a fixture between the posts for Barcelona and is set to start at the weekend.

Xavi is struggling with injury issues that will force his hand to make changes at the back. Andreas Christensen, who plays in a usual 4-3-3, is expected to replace the injured Ronald Araujo in the Barcelona line-up. Christensen will support Eric Garcia in central defence, while the fit Sergi Roberto replaces the injured Jules Kounde at right-back. 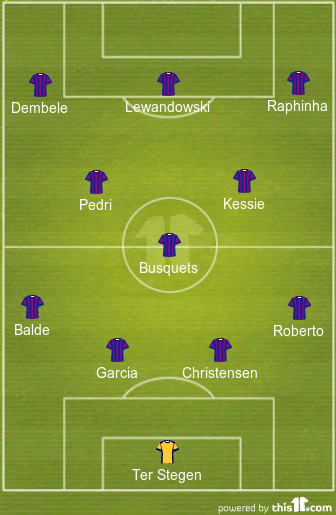 The Barcelona boss will stay with young Alejandro Balde at left-back ahead of experienced Jordi Alba, with the academy product set to enjoy a number of games in his potentially breakthrough campaign at the club.

Up front in midfield, Sergio Busquets will take on the role of No. 6 and try to control the game for the visitors. Frenkie de Jong’s injury could open the door for Franck Kessie to start and the Ivorian will be keen to grab his chance against Mallorca with both hands.

Pedri will complete Barcelona’s midfield trio as they have become a fixture in the team under Xavi. So Gavi has to settle for a role on the bench.

Barcelona have a fiery attack led by goal machine Robert Lewandowski. The Pole has been sensational since joining the club in the summer and will be looking to continue his rich streak in form. Ousmane Dembele is an automatic choice on the left in Barcelona’s line-up, with Raphinha expected to get the nod over Ansu Fati on the right.