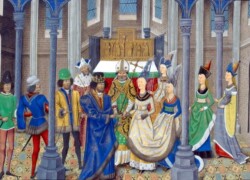 That a fully independent republic like Portugal could officially declare three days of national mourning for a foreign monarch is remarkable, but such is respect for the late Queen Elizabeth II and this country’s centuries-long close ties with Britain.

The mourning here coincides with Monday’s funeral in London, attended by Portugal’s President Marcelo Rebelo de Sousa and many other heads of state.

Under the Treaty of Windsor

As early as 1386, Portugal and Great Britain forged a bond of friendship known as the Anglo-Portuguese Alliance. That was centuries before the two seafaring nations on the western fringes of the European continent created separate empires around the world without conflict. The alliance is still in effect today.

Portugal’s last monarch was Dom Manuel ll. His reign ended with the October Revolution of 1910. Manuel spent the last two decades of his life in exile in Twickenham, England.

In 1932, the year Manuel died, the then British monarch, King George V, addressed his people on the radio for the first time. He wished them a Merry Christmas in a speech by legendary writer Rudyard Kipling.George V’s granddaughter, Elizabeth, was just six years old at the time. Her coronation in 1952 was televised live and is said to have been the major event that established television as a mainstream medium in Britain. She’s totally dominated it day and night since her death on Thursday the 8th th

September. Queen Elizabeth and her husband, the Duke of Edinburgh, made two state visits to Portugal. The first was in 1957 during the Estado Novo Dictatorship of Antonio Oliveira Salazar. The second took place in 1985 when crowds cheered and sang in the port city of Setubal ‘Viva a Rainha’

before the royal couple embarked on a four-day tour of Lisbon, Porto and Evora in the Alentejo.Prince Charles visited Portugal with his wife Princess Diana in 1987. They attended a memorial service to mark the 600th th

Anniversary of the marriage of King Dom João l of Portugal to Philippa of Lancaster, daughter of John of Gaunt of England. It coincided with the alliance of the Treaty of Windsor of 1387. Prince Charles paid another visit, this time in 2011 with his current wife Camilla, now the new king’s consort.

With the COVID pandemic abating, the number of British holidaymakers in Portugal has skyrocketed again. More than 46,000 British nationals currently live in Portugal, the second largest number of expatriates after those from the former Portuguese colony of Brazil. The number of Portuguese nationals residing in the United Kingdom was estimated at around 270,000 in 2020. sealing of
Treaty of Windsor

is a journalist and author. Born in Ireland, he published his first written texts while working at the Natural History Museum in London. since th en He has worked as a news reporter mainly in Hong Kong, Northern Ireland, South Africa and Portugal. In addition to covering tough news for some of the world’s leading news organizations, he has written numerous feature articles on all kinds of subjects for a range of publications. Today he lives in southern Portugal and his books include travel guides and children’s stories. His e-books – people in another place and The Fátima Phenomenon – Divine Grace, Delusion or Pious Fraud?

are available from Amazon.com and amazon.co.uk. His blog posts can be viewed at algarvenewswatch.blogspot.com