PANMUNJOM, Korea (AP) — In a show of defiance, North Korea fired two short-range ballistic missiles into the sea on Thursday, hours after U.S. Vice President Kamala Harris flew home from a visit to South Korea during which she traveled to the demilitarized zone, the separating the two Koreas and stressed the US’ “iron-clad” commitment to the security of its Asian allies.

It marked North Korea’s third round of missile launches this week, extending a record pace of weapons testing as it accelerates the push to expand its arsenal and pressure Washington to accept it as a nuclear power.

South Korea’s joint chiefs of staff said the missiles were fired nine minutes apart from an area north of the capital Pyongyang and headed for waters between the Korean peninsula and Japan.

Japan’s military said it also detected the launches. North Korea fired two short-range ballistic missiles on Wednesday while Harris was in Japan and one before she left Washington on Sunday.

Earlier, Harris ended her four-day trip to Asia with a meeting with South Korean President Yoon Suk Yeol and a stop in the DMZ, where she addressed the threat posed by the increasingly hostile north.

There are concerns that North Korea could soon conduct a nuclear test that would bring the country closer to being recognized as a full-fledged nuclear power.

Visiting the DMZ has become something of a ritual for American leaders hoping to show their resolve to stand up to the aggression.

In the DMZ, Harris walked to the top of a ridge, near watchtowers and surveillance cameras. She peered through bulky binoculars while a South Korean officer pointed out military installations on the south side. Then an American officer pointed out some defenses along the military demarcation line, including barbed wire fences and claymore mines. He said American soldiers regularly patrolled a trail.

Harris then visited one of a series of blue buildings that stretch across the demarcation line, where an American officer explained how the buildings are still used to conduct negotiations with North Korea. Sometimes they pass messages back and forth and sometimes they use a megaphone, he said.

Also Read :  This is why bodies of water all over North America are drying up

Harris agreed. “The past and the present happen every day.”

Then she walked out of the building and up to the demarcation line. On the North Korean side, two figures in what appeared to be hazmat suits peeked out from behind a curtain in a second-story window. Then they disappeared back inside.

Harris described this week’s missile launches as provocations aimed at “destabilizing the region” and said the United States and South Korea would remain committed to the “full denuclearization” of the North.

“I cannot stress enough that the United States’ commitment to the defense of the Republic of Korea is unwavering,” she said.

“In the south we see a thriving democracy. In the north we see a brutal dictatorship,” she said before flying over the border in a US military helicopter.

Earlier, Harris met with President Yoon at his Seoul office and reaffirmed the US commitment to use the full range of its military capabilities to defend the South in the event of war, Yoon’s office said.

They expressed concern over North Korea’s threats of a nuclear conflict and promised an unspecified stronger response to major North Korean provocations, including a nuclear test.

Harris and Yoon were also scheduled to discuss expanding economic and technology partnerships and repairing recently strained South Korea-Japan ties to strengthen their trilateral cooperation with Washington in the region. Their meeting also touched on Taiwan, with both reaffirming their countries’ support for “peace and stability” across the Taiwan Strait, according to Yoon’s office, which did not elaborate.

Harris’ trip was organized so she could attend the state funeral of former Japanese Prime Minister Shinzo Abe, but her itinerary was dominated by security concerns, mirroring fears about China’s growing power and North Korea’s increased testing activities. 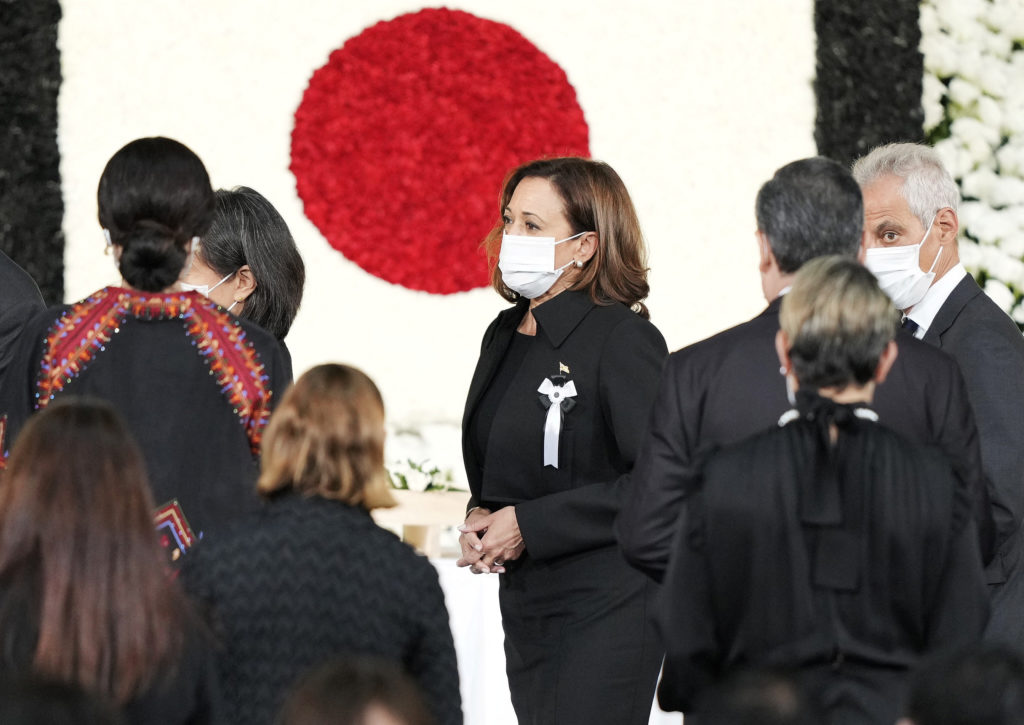 At each meeting, Harris sought to allay any fears that the United States was faltering in its commitment to protecting its allies, calling America’s partnerships with South Korea and Japan “the lynchpin” and “cornerstone” of its defense strategy in Asia.

Yoon, who took office earlier this year, anchored his campaign with a pledge to deepen Seoul’s economic and security partnership with Washington to meet challenges posed by the North Korean threat and address potential supply chain risks posed by the pandemic, which Rivalry between the US and China, and Russia’s war against Ukraine. But the alliance has recently been characterized by tensions.

South Koreans have denounced a new law signed into law by President Joe Biden that bars electric cars built outside of North America from being eligible for US government subsidies, undermining the competitiveness of automakers like Seoul-based Hyundai.

During their meeting, Harris told Yoon that Washington will try to address South Korean concerns while the law is implemented, Yoon’s office said.

Scott Snyder, an analyst with the Council on Foreign Relations, said the electric vehicle dispute has quickly become a firestorm that US officials cannot ignore, though there may not be an easy fix.

“It takes on an urgency that makes it a political issue that needs to be addressed,” Snyder said. “I don’t know if it’s going to be easy for the Biden administration to do that.”

There are indications that North Korea may soon step up its gun demonstrations. South Korean officials said last week they had spotted signs that North Korea is preparing to test a ballistic missile system to be launched from submarines.

The U.S. aircraft carrier USS Ronald Reagan was scheduled to train Friday with South Korean and Japanese warships in waters near the Korean peninsula in the countries’ first trilateral anti-submarine drills since 2017 to counter North Korea’s submarine threats, the South Korean navy said on Thursday with

US and South Korean officials also say North Korea may be preparing for its first nuclear test since 2017. That test could come after China holds its Communist Party convention the week of October 16 but before the United States holds its midterm elections in November. 8, according to Seoul’s spy agency.

In Japan, Defense Minister Yasukazu Hamada expressed concern that North Korea was improving its weapons technology through its “unprecedented” series of tests.

The South Korean and Japanese military said the missiles launched Thursday had a range of 300 to 350 kilometers (180 to 217 miles) and a maximum altitude of 50 kilometers (30 miles).

The low-altitude trajectory resembled that of short-range ballistic missiles launched by North Korea earlier in the week.

Some analysts say these launches likely involved a new solid-fuel weapon modeled after Russia’s Iskander missiles, which fly at relatively low altitudes and are maneuverable in flight, making them more difficult to intercept by missile defenses. The missiles are part of a growing arsenal of short-range nuclear-capable systems that North Korea has been developing since 2019 as it expands its arsenal against rival South Korea.

North Korea has paused its testing activities with repeated threats of a nuclear conflict. His approved parliament this month authorized the pre-emptive use of nuclear weapons in a variety of scenarios threatening his leadership.

US-North Korea nuclear diplomacy has stalled since 2019 over disagreements over easing crippling US-led economic sanctions on North Korea in exchange for the North’s disarmament moves.