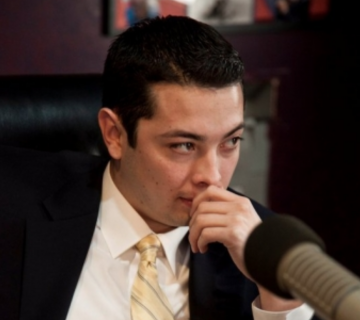 A GoLocal investigation that began more than three months ago uncovered 26 trips by then-Central Falls Mayor James Diossa — many of the trips to exotic locations.

Now, GoLocal has uncovered more than a dozen additional trips and an attempt by Diossa to cover up the true cost to taxpayers of his travel expenses.

Diossa is running for treasurer general in Rhode Island and if elected he will be responsible for about $10 billion in retiree pension funds.

Central Falls is perhaps best known nationally for its 2011 bankruptcy and is Rhode Island’s poorest city. The per capita income in Central Falls is only $15,910 per year.

Of the 26 trips previously uncovered by GoLocal, ten were international, including East Timor, Malaysia, England, Mexico, Colombia, China, and several trips to Israel and Taiwan.

Diossa’s campaign claimed that those 26 trips were paid for entirely by third parties.

But this claim by Diossa’s team was a lie.

The false testimony helped him weather a tough Democratic primary against Stefan Pryor.

Trips made by Diossa, partially or fully paid for by third parties – 26 in total, 10 of which are international.

After GoLocal’s original story was first published on Aug. 11, Alisha Pina, Diossa’s spokesperson, said during an appearance on WPRO with Tara Granahan that same day, “None of these trips were spent on taxpayers’ money.”

LISTEN TO THE DOSSA CAMPAIGN CLAIM ABOVE

A GoLocal Access to Public Records Act (APRA) application filed with the City of Central Falls on Aug. 12 — which has been repeatedly delayed by Central Falls City Attorney Matthew Jerzyk — when it was escalated to GoLocal this week, revealed that Diossa charged the city thousands of dollars for the trips — the very trips his campaign said were paid solely by third parties.

Jerzyk, a longtime pal of Diossa, is also a registered State House lobbyist and a former director of a Rhode Island hemp company.

Financial documents given to GoLocal by the city of Central Falls revealed that the city hit by an accident paid thousands of dollars to fund near-endless trips. More than $1,100 was spent in Central Falls on a trip to England sponsored in part by the Blackstone Valley Tourism Council – the organization gets its funding from state and federal taxpayers’ money.

Diossa charged the city of Central Falls for part of his trip to Kuala Lumpur, Malaysia. The main sponsor of the trip was an organization called Next City.

A trip to Colombia sponsored by the Colombian government was also partially funded by Central Falls taxpayers, according to city records.

Diossa refused to answer questions about the trips, the cost, or the misleading claims.

GoLocal also found numerous other trips paid for with city funds, including a trip to Dubai in the United Emirates. This trip was paid for in full by Central Falls residents and cost nearly $6,000, according to city records. Records show that flight and hotel costs alone exceeded $5,200.

The city refused to explain the purpose of Diossa’s trip to Dubai. Diossa did not answer questions about the Dubai trip.

Also Read :  Travel Photography: The Independent Photographer Has Announced The Winners Of Its 2022 Contest (10 Pics)

While Diossa was traveling, the city of Central Falls retirees were hit with significant cuts in their pensions as a result of the city’s bankruptcy.

But Dubai was just one of the trips Central Falls residents footed the bill for — there were more than a dozen other trips.

Central Falls’ financial document shows the city is paying more than $5,200 for travel and hotels alone. Meals and other incidental expenses listed in other listings.

More questions arise about Diossa’s reporting of actual costs. According to the Rhode Island Ethics Committee’s financial report, Diossa traveled to China in 2019. The total cost of the trip was reportedly only $400.00. It’s unclear what the actual cost was and whether the City of Central Falls paid the balance.

The cost of Diossa’s travel while serving as mayor was not budgeted as travel by Central Falls; Instead, entries were made in the city’s ledger under “Professional Development and Education.”

In all, Diossa spent months traveling across the United States and around the world — the bill being footed by third parties and Central Falls’ taxpayers.