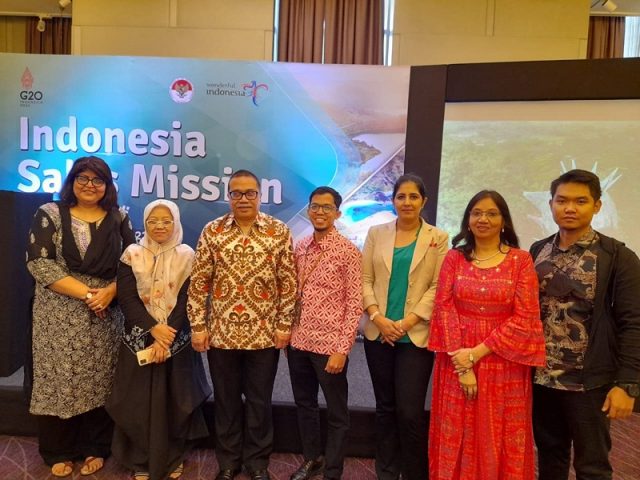 In the spirit of stimulating international tourist visits, Wonderful Indonesia presented the most outstanding destinations and new experiences at the Indonesia Sales Mission held in Chennai and Bengaluru from September 16th to 19th, 2022. The event brought Indonesian vendors ie Indonesian hoteliers, restaurateurs, Indonesian tour operators. and Indian buyers ie Tour Operators, MICE Agents and Wedding Planners under one roof. The roadshows were held to further strengthen ties with the Indian travel industry and showcase some of Indonesia’s hidden gems. The roadshow provided a platform for Indonesian stakeholders to engage directly with the Indian travel industry. It is also an opportunity for the Indian travel industry to get the latest updates on Indonesia and to meet face-to-face with representatives of some of the archipelago’s most popular hotels and resorts and travel agents participating in the roadshow

There was an overwhelming response to the roadshow from the Indian travel industry, showing their keen interest in the destination. Attendees in each city included travel wholesalers, travel agents and media. Raffles were held in each city where participants could win hotel stay vouchers and many other goodies.

Indonesia is underscoring its international presence this year by assuming the G20 presidency. Under the motto “Recover Together, Recover Stronger”, the multilateral event kicked off in various cities in December 2021, with the event summit taking place in November 2022. Indonesia not only welcomed international governmental bodies and organizations to the G20, but also successfully hosted global sporting events year respectively MotoGP in March and Formula E in June. The international presence gained is expected to mark the country’s economic revitalization and provide job opportunities for the affected community in the wake of the COVID-19 pandemic.

Indonesia was recently ranked as the number one most beautiful country in the world according to money.co.uk’s Natural Beauty Report. Indonesia’s natural beauty scored 7.77 out of 10.

Indian tourists will dominate demand in Indonesia’s South Asian market in the first half of 2022. With the ease of international entry requirements and Visa on Arrival (VoA), travelers from India can now safely enjoy their holidays in Indonesia to the fullest. Aside from its great culture, tourists can also enjoy the diversity of Indonesia’s natural beauty, adventure, and wildlife. In addition to Bali, one of the most popular islands, we have 5 priority destinations (Lake Toba, Borobudur, Mandalika, Labuan Bajo and Likupang).

Lake Toba is a world-class geopark-based tourism destination on the island of Sumatra. This natural wonder is a magnificent caldera formed by a mega volcanic eruption some 74,000 years ago. It is the second largest lake in the world which offers the charm of green mountains that pamper the eyes, breathe fresh clean air and a vast expanse of lake water that can be seen from the accommodations nearby.

The magnificent Borobudur is the world’s largest Buddhist temple on the island of Java. The monument sits majestically on a hill surrounded by the beautiful landscape of lush green fields and distant hills. Built between 780 and 840 AD during the rule of the Syailendra dynasty, the temple’s design in Gupta architecture reflects India’s influence on the region. However, enough indigenous scenes and elements are included to make Borobudur uniquely Indonesian.

Mandalika is the ultimate paradise in the heart of Lombok. Due to its coastal location, Mandalika is blessed with a number of stunning beaches. The Special Tourism Economic Zone also features lively bars and nightclubs, exciting water parks, luxurious hotels and resorts, mesmerizing golf courses, rejuvenating spas, exhilarating racetracks and more.

On the westernmost tip of Flores Island lies the town of Labuan Bajo. It is peaceful, with many wonders waiting for you to explore. Labuan Bajo was just a small fishing town but grew to become the gateway to many exotic destinations in East Nusa Tenggara. Komodo National Park was inscribed on the UNESCO World Heritage List in 1991. It is home to fascinating wildlife both on land and under water. The park consists of Komodo Island, Rinca Island, Padar Island and numerous smaller islands in the area. Labuan Bajo is known as the sunset city. You can find many breathtaking views of the spectacular sky.

North Sulawesi is a province in Indonesia known for its stunning natural attractions. The beaches, the mountains and the lush forests are the highlights that make this destination special. One of the best places you can find here is Likupang Beach. The beach is located in the northernmost part of Sulawesi and is only 48 km away from Manado, more precisely in a district called Likupang. When you see Likupang Beach for the first time, you will be blown away by its magnificent and expansive white sand beach. It also has beautiful clear sea water and also offers several other tourist attractions. In addition, you can also dive to experience the underwater scenery that will mesmerize you.

A Guide To Visiting Arc De Triomphe (& How To Get Inside)

To evade tough questions in Parliament, Trudeau and co want to “Work from Home” indefinitely