While the location — just over 10 miles from the Mason-Dixon Line — might not immediately spring to mind when thinking of areas of historical Italian-American importance, the Letterkenny Army Depot site tells a very different story.

During World War II, the United States government interned more than 1,200 captured Italian soldiers at Letterkenny. From May 1944 to October 1945 these soldiers became part of the 321St Italian Quartermaster Battalion, originally commanded by Lt. Col. Salvatore Campa and then by Maj. Angelo Bassi. The 321stSt was then divided into six Italian Service Units (ISUs) which provided support at the new depot.

The Letterkenny Army Ordinance Depot, as it was then called, was one of the nation’s largest and newest military depots at the time of the arrival of the Italian POWs. It was established just a few years earlier in 1942 on 20,000 acres of farmland. Letterkenny contained 30 warehouses and 800 underground storage units, used to store ammunition, guns, and other military equipment, which was then boxed and shipped to Europe and the Pacific. Working side-by-side with Americans, the Italian POWs worked with the United States to help defeat the Axis powers, leaving their mark both in the depot and in the surrounding area.

“Because of different regulations based on the Geneva Convention, we had to provide our prisoners of war with the same amount of rations and medical supplies as our own troops and provide them with similar housing,” said Alan R. Perry, PhD, Chair of the Department of Italian Studies at Gettysburg College and co-authored with Flavio G. Conti several books outlining the experiences of Italian prisoners of war in Pennsylvania. “Our troops have been uniformly treated better than any other nation in the world. When you were captured by the United States, you were treated very, very well.”

In the case of the Letterkenny POWs, the men were granted liberties that helped them assimilate into American and Italian-American life during their internment. These freedoms included the ability to receive visitors and travel from base to heavily Italian-populated places like Philadelphia.

“The Italian-American communities were really responsive to having the POWs around, they saw them as a reference point that was of great importance to them, and they felt compelled to reach out to them,” Perry said. “Many Italian-American families drove to Letterkenny on Sundays—some traveling for several hours at a time—just to visit POWs. It was one of the ways Italian-Americans strengthened their own identity, their sense of being Italian. They were Americans, but they didn’t forget where they came from, and that was borne out by the care they gave to Italian POWs.”

While the POWs were embraced by the Italian-American community, they also embraced their lives in the fledgling depot, as evidenced by the buildings they helped design that still stand today, such as the chapel, bell tower, and assembly hall. The POWs also built an amphitheater that has since been demolished.

Adding to the deep emotional ties surrounding the experience of the Italian POWs at Letterkenny is the lore that can be felt today in the remaining buildings, most notably the Letterkenny Army Depot Chapel. In early 1945, the US command had the POWs start building a chapel to be used exclusively as a place of worship. Popular lore has it that the depot commander at the time, Colonel Ray M. Hare, discovered that one of the Italian POWs had learned of his wife’s death in Italy and that the despondent POW was about to commit suicide.

According to Perry and Conti’s research, the POW in question was most likely Sgt. Maj. Giuliano Orzali, a Tuscan master mason who was in Letterkenny at the time. Col. Hare commissioned the prisoner of war to build the chapel to help him channel his grief. Another Italian POW, 2LT Marcello Iovine, oversaw Orzali and a dedicated construction crew. Using materials salvaged from abandoned farmhouses on posts, the chapel was built at no cost to the United States government and dedicated on May 13, 1945. It is the only chapel of its kind in the United States. 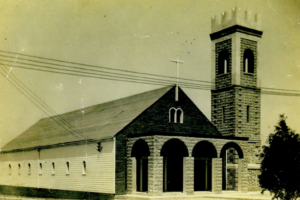 “We built this church with our bare hands and by faith in God,” said the late Alfred Tonolo, one of the prisoners of war who helped build the chapel during a rededication ceremony in 2003 after it was received by the United Churches of the Chambersburg Area had been acquired. Tonolo met his wife, Tina Norce, in Letterkenny when their family traveled approximately 150 miles from their home in Berwick, Pennsylvania, one Sunday to visit the POWs. They corresponded four years after the war and married in Italy in 1949. Tonolo eventually earned his PhD and served on the faculty at Bloomsburg University for nearly 30 years.

The chapel itself was the site of a mass in 2015 to commemorate the 70thth Anniversary of the repatriation of Letterkenny POWs to Italy organized by Perry and Conti. Several children and grandchildren of former Italian prisoners of war attended the mass. The reunion of POW descendants made it clear that the POW story needed to be told further, and in 2016 the Italy-based Associazione per la Memoria dei Prigionieri Italiani a Letterkenny (AMPIL) was founded.

Antonio Brescianini, whose father Luigi was interned in Letterkenny, was President of AMPIL from its founding until 2020. Brescianini was mayor of Vimodrone, near Milan, in 2014 and had access to Letterkenny’s list of former POWs. His search enabled him to contact around 600 families.

“This quest brought up emotions and memories of loved ones,” he said. “Many people go in search of photos, documents to bring to light the memories they have heard about their loved ones in life.”

Brescianini attended the 2015 fair along with 23 other family members of former prisoners of war.

“This fair has helped strengthen friendly ties between our peoples,” he said. “The chapel was built with love by our fathers with devotion to God to thank Him for the mercy He had during the time of war. A piece of the twin towers has in recent years been placed next to the small church nicknamed the Church of Peace, meaning that the peace and love shown to our prisoners at Letterkenny always triumphs over evil.”

Although all former prisoners of war have since passed away, their children and grandchildren keep their memories alive through AMPIL. In September 2022 a group attended Letterkenny Chapel for their 75th birthdayth anniversary of the repatriation. Visitors brought many gifts from Italy to thank the community for the kindness shown to prisoners of war so many years ago, including artwork by Aldo Mazzantini, whose father Amilcare was a prisoner of war at Letterkenny. Mazzantini created a sculpture of the “Deposition” of Jesus in Mary’s arms after his crucifixion, which was placed in the Corpus Christi Church in Chambersburg in thanksgiving for the church’s pastoral service to prisoners of war during their incarceration. Carlo Borghetti, the Vice President of the Region of Lombardy, gave an organ recital before a memorial mass commemorating the prisoners of war at the Corpus Christi church.

“This vibrant power of love is still deeply lived and cherished by the children and grandchildren of these soldiers,” Perry said. “These Italian POWs actively contributed to the defeat of Nazi Germany. That’s an important story, but it’s not really well known. There is too little celebration. Its meaning is only now emerging.”

Italian Prisoners of War in Pennsylvania: Allies on the Home Front, 1944–1945 by Flavio G. Conti and Alan R. Perry.

Stephanie Longo is Associate Producer of the Italian American Podcast and author of three books about Italian heritage in Northeastern Pennsylvania. Learn more about them below www.stephanielongowriter.com.

Make the pledge and become a member of Italian Sons and Daughters of America today.