When I last interviewed Marcus Hanna, General Manager of Fairmont and Swissotel The Stamford, Singapore, we were both masked, his hotels were like ghost towns, the latter being a quarantine hotel (which remained so for three years), and he was speaking to me what it was like to manage a “Hotel California”-type situation where guests couldn’t leave their rooms.

Almost 18 months later, we sat across from each other at the very busy Mikuni Restaurant at the Fairmont and Hanna looks decidedly happier and lighter after having consciously lost at least 10kg. “I’m better, the hotels are better,” he smiled.

Business has returned in Singapore, led by the conference and meetings sector. With Hong Kong still out of service, events formerly held on the territory have been moved to Singapore. For example, Jewelery & Gem World, known as “the mother of all fairs”, a Hong Kong staple, will be held at Singapore Expo from September 27th to 30th. 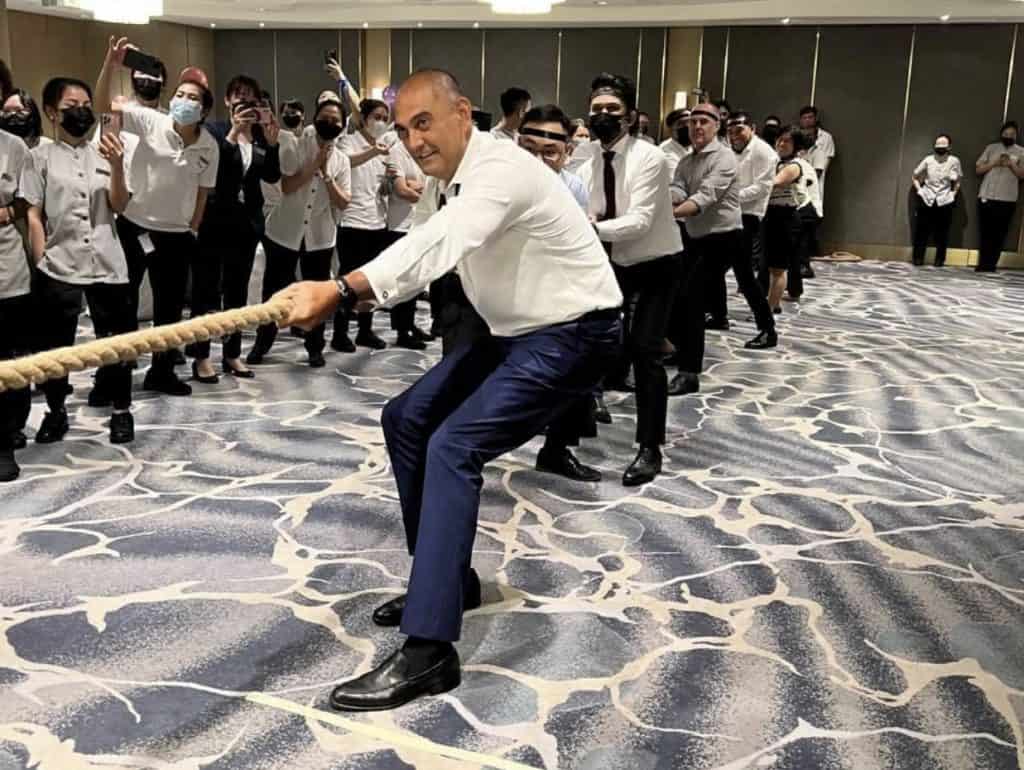 Bringing the hotels back was a team sport as a light and fit Marcus Hanna showed his strength in this team sport which was part of a staff appreciation day.

And Singapore has a number of events coming up, including the 2022 Formula 1 Singapore Airlines Singapore Grand Prix from September 30th to October 2nd after a two-year hiatus, as well as the Milken Institute Asia Summit, the Forbes Global CEO Conference and several crypto events in the September, followed by gamescom asia in October, not to mention two Northstar Travel Group events – WiT Singapore (October 3-5) as well as the HICAP Hotel Investment Conference (October 19-21), the latter of which is taking place will be held at the Fairmont & Swissôtel The Stamford.

Hotel rooms in Singapore are now the most expensive in almost a decade, according to the latest data from the Singapore Tourism Board (STB). At S$259 ($184) per night, the average July hotel room rate rose almost 70% year-on-year to its highest level since September 2012.

STB data also shows that visitor arrivals rose for the sixth straight month to 726,601 in July, up from 543,733 in June. Around four to six million visitors are expected in 2022. Indonesia, India, Malaysia, Australia and the Philippines were the top five visitor markets, accounting for 56% of Singapore’s total visitor arrivals in H1.

The Raffles City Convention Center, which Hanna also manages, is buzzing with back-to-back conferences and incentives in fields like consulting, finance, technology and pharmaceuticals making a strong comeback.

“If you had asked me six months ago if we would see such a recovery, I would have said no. Business has recovered faster than expected, particularly the conferencing business. Businesses are coming back together, we’re seeing incentives, corporate business has returned, but not at the same level, but they’re staying longer, an extra 1.2 to 1.5 days longer. Leisure guests also stay longer and no longer make multiple stops like they used to.”

Its three strongest markets are Indonesia, Australia and India. “The US and Europe are also recovering well, as is Malaysia.”

The fact that the occupancy rates are now in the 70s-80s with “significantly higher” rates, even without China and Japan, is a positive sign, said Hanna. “China accounted for 19% of arrivals in Singapore and we thought it would be difficult to compensate, but at our convention center our September revenue is higher than pre-Covid.

“It’s a great feeling for the team. That’s what we entered the industry for – to make people happy, to create experiences. And the prospects until the end of the year are very strong.”

As the business ramps up, of course, there are staffing challenges. “Swissotel was a quarantine hotel for three years. It took a few months to get it back. There were times when nobody stayed at the hotel and we had good maintenance, cleaning and disinfection.

“We had to retrain the team – they hadn’t properly checked guests in for over two years – to make them safer with guests again and not having to wear PPE equipment. We had to increase the team – we are now at 75% of pre-Covid headcount.”

While it struggled to keep all employees during the pandemic, it was forced to lay off in October 2020. “We are grateful to the team members who stayed with us during Covid. If you join the hospitality industry, you have not signed up to wear PPE equipment. They have shown great resilience and I’m proud of them,” said Hanna.

It has introduced technology wherever possible to solve staffing problems – online check-in and check-out, a robot in the restaurant reservation system to process third-party bookings, allowing, for example, a reservation from the restaurant app Chope without manual entry goes directly into the system; tablets at the table; and in-room orders through the customer’s own device.

Regarding contactless ordering and payment at the restaurants, Hanna said, “We’re looking into that. I feel like people are tired of scanning menus and we’ve gone back to physical menus.”

A farm for all seasons and suites for gamers 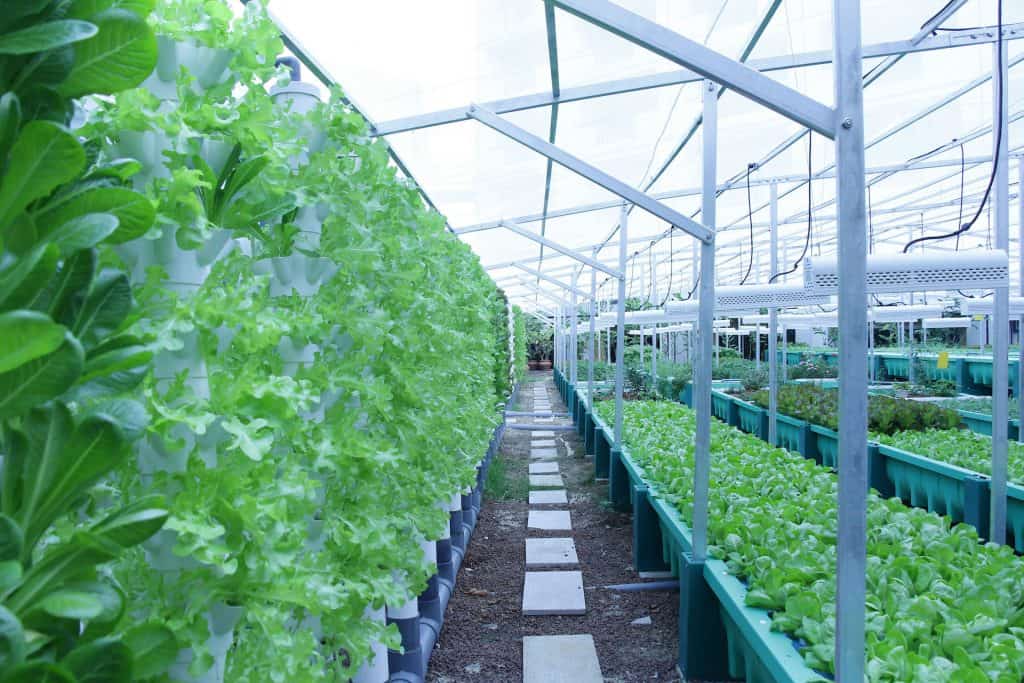 The aquaponic farm serves its purpose during and after the pandemic

Its aquaponics farm, which has won the hotel multiple sustainability awards, has come in handy during the pandemic — it has been able to function as an online supermarket, selling fresh produce and delivering groceries for guests in quarantine. “And now that prices are rising around the world, the farm makes even more sense in terms of price, sustainability and the quality of the product,” said Hanna.

The farm now supplies up to 70% of the hotels’ vegetables and their best-seller at Stamford Brasserie is a dish that combines farm-grown fish and leaves. “It’s a great story, people find it fascinating that both are locally grown,” he said.

It also helps corporate customers, whose first question now is: “What else are you doing for sustainability besides giving up plastic bottles?”

Hanna also set up a hybrid studio for events during the pandemic, but it has since been dismantled “although we can always bring it back should a client wish.”

However, he said there is a trend towards 100% physical events. Holding physical events also required retraining on both sides. “From a customer perspective, the expectations are higher and there is a lot more hand-holding because they haven’t organized events for quite some time. Let’s just say pre-event communication is pretty intense these days. But during events people are just happy to be together again.”

“Themes” were also a success story in real estate. His CoComelon at the Clove Restaurant is a hit with kids and consistently booked, and his Hello Kitty High Tea sells out. “I didn’t know how big Hello Kitty was until now,” laughs Hanna. 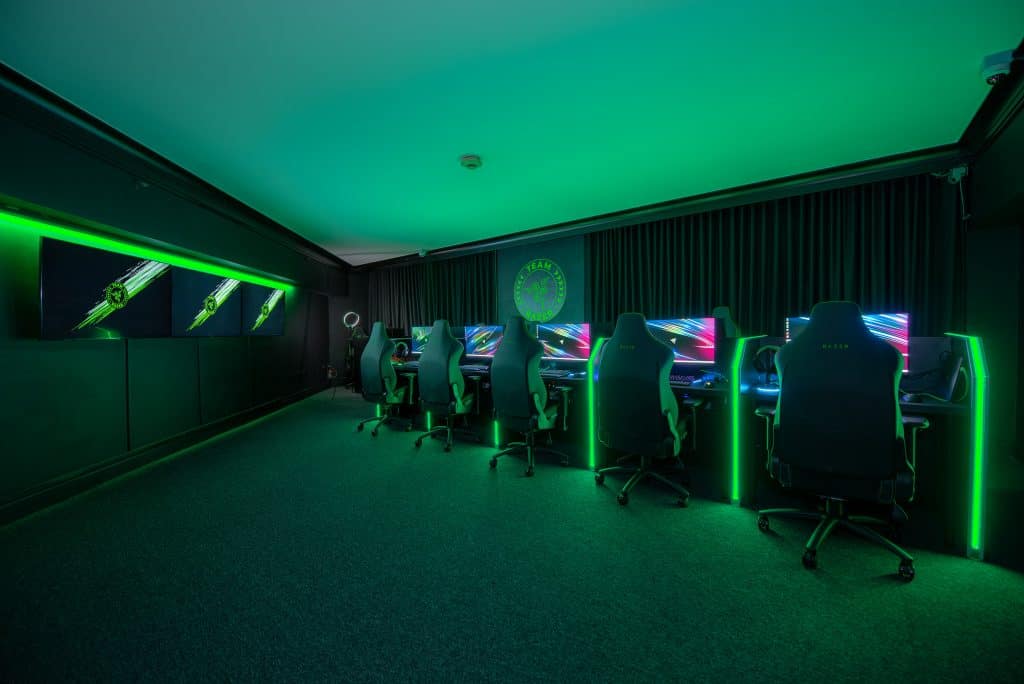 Luxury suites for gamers in partnership with Razer

To have “the game space” in the conference space, it partnered with Razer, the global lifestyle brand for gamers, to create what is said to be the world’s first luxury gaming suites at the Fairmont. It transformed three suites into player-centric accommodations, complete with Razer gaming peripherals.

“After hosting ONE Esports Dota 2 Singapore Major last year, we thought about what else we could do to own this space – this niche and diverse communities of gamers at a time when gaming is penetrating the mainstream Has.”

As for all the domestic packages created during the pandemic – Mancation, Mumcation, Hello Kitty Staycation, you name it – Hanna admitted: “Since the market opened up, they’re not that relevant anymore. But we will keep them for the school holidays. At today’s airline ticket prices I think we’re still going to see a decent deal from Staycations.”

At the moment the business is again 90% international instead of 100% national – as it should be and exactly how Hanna and her team like it.