Local teachers and students explore the history, art and cuisine of England and France

CAPAC – It was a journey of more than two years of waiting, but in June 2022 a group of students and teachers from Capac Community School and their guests got on a plane and spent 10 days in England and France.

The international excursion was originally scheduled to take place in March 2020 and 30 travelers had signed up, but then the coronavirus pandemic halted those plans and for a number of reasons the group size shrank back down to 19 at the time of the trip.

Aside from a delay when they first set foot in London, “the trip went very smoothly,” said teacher and organizer Mary Sokacz.

They, like many other travelers this summer, had luggage problems and had to wait three hours after landing at Heathrow Airport to finally get their suitcases and bags.

Student Preston Lottie, who is now a senior, said the group did a lot of sightseeing during their time there. High on his list were Buckingham Palace, Stonehedge – where they happened to be during the summer solstice – and the Prime Meridian at the Royal Observatory. The meridian is the line dividing the eastern and western hemispheres of the earth. 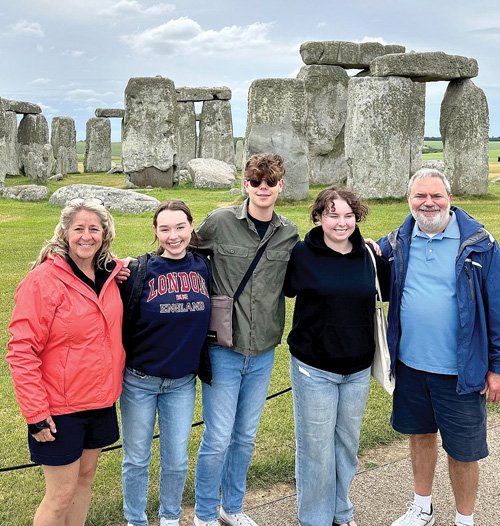 The group also had the opportunity to visit Stonehedge during the summer solstice.

His impression of English cuisine was not so favourable.

“The English like their fries moist and they prefer mayonnaise to ketchup, so there were these warm bottles of mayo on the table,” he said.

Her group crossed the English Channel by boat and landed in Cannes, France.

During their stay on the continent, they visited several castles, spent some time in Paris and took a hike to the Normandy beaches and Normandy American Cemetery, the final resting place for more than 9,000 soldiers who died in World War II.

Preston said the cemetery is immaculate and looks like it was just laid out.

He found Parisians and their boulevards a little friendlier than the crowded streets of London.

Her group had a chance to walk all the way to the top of the Eiffel Tower, and Sokacz said they got off a river cruise on another day just in time to see the tower’s lights come on with a glittering flourish.

For Sokacz, the opportunity to take a cooking class in France is something she will never forget. The home of fine dining, local chefs shared tips while students prepared a dessert and the adults created a main course.

“The best thing was that we ended up eating what we made,” she said.

Preston agreed that France’s renowned cuisine lives up to its reputation, but it’s difficult to find some of the coveted flavors from home, such as: B. Diet Coke.

Sokacz, who has led many class trips to places like Washington, DC and Philadelphia, said providing students with this type of opportunity helps students “get out of their comfort zone and see what the world has to offer.” .

Travel of any kind is also great for building teens’ confidence, she said, but international travel takes that up a notch considering they’ll have to interact with people and navigate new places where a different language is spoken .

“They start thinking, ‘If I can travel to another country and get my bearings there, there’s nothing I can’t do,'” she said.

Sokacz is already planning to organize an eight-day trip to Spain next June. In addition to students, staff and their families, alumni and residents of the Capac region are also invited to join them.