Just a few days ago, Yann Busnel was a bit worried about pirates.

As he and a companion sailed past Yemen and Eritrea, they chased good winds to get quickly through an infamous area of ​​the Red Sea.

“We open our eyes in case of a pirate attack, because here it’s not nice Jack Sparrow chasing The Flying Hollander,” Busnel wrote on Instagram. “If they catch us, that’s a different story!”

Ultimately, Busnel got through without incident, but it won’t be the last time he faces the dangers of the world’s wildest places. The 35-year-old Frenchman embarked on an almost unimaginable journey from South Africa in January.

He wants to travel – without motorized transport – from Cape Agulhas, the southernmost point of Africa, to Cape Horn at the foot of South America. He has already toured Africa and parts of the Middle East.

But with a planned itinerary of 50,000 km – probably the longest route in the world – Busnel’s goal remains years away. He must travel through the Middle East and Europe, and then draw a diagonal line across Asia. Busnel plans to reach America via the Bering Strait and then travel all the way back to the world.

The entire journey is expected to take three to four years, taking into account Busnel’s zero emissions commitment for the journey. He calls the project “Beyond The Capes” – an expedition by foot, bike, camel, boat, kayak, canoe and maybe even some longboarding.

Just don’t ask him to hurry – Busnel is determined to enjoy the journey.

“I did not go into a time trial,” he told the French newspaper “Le Telegramme”. “I take my time.” 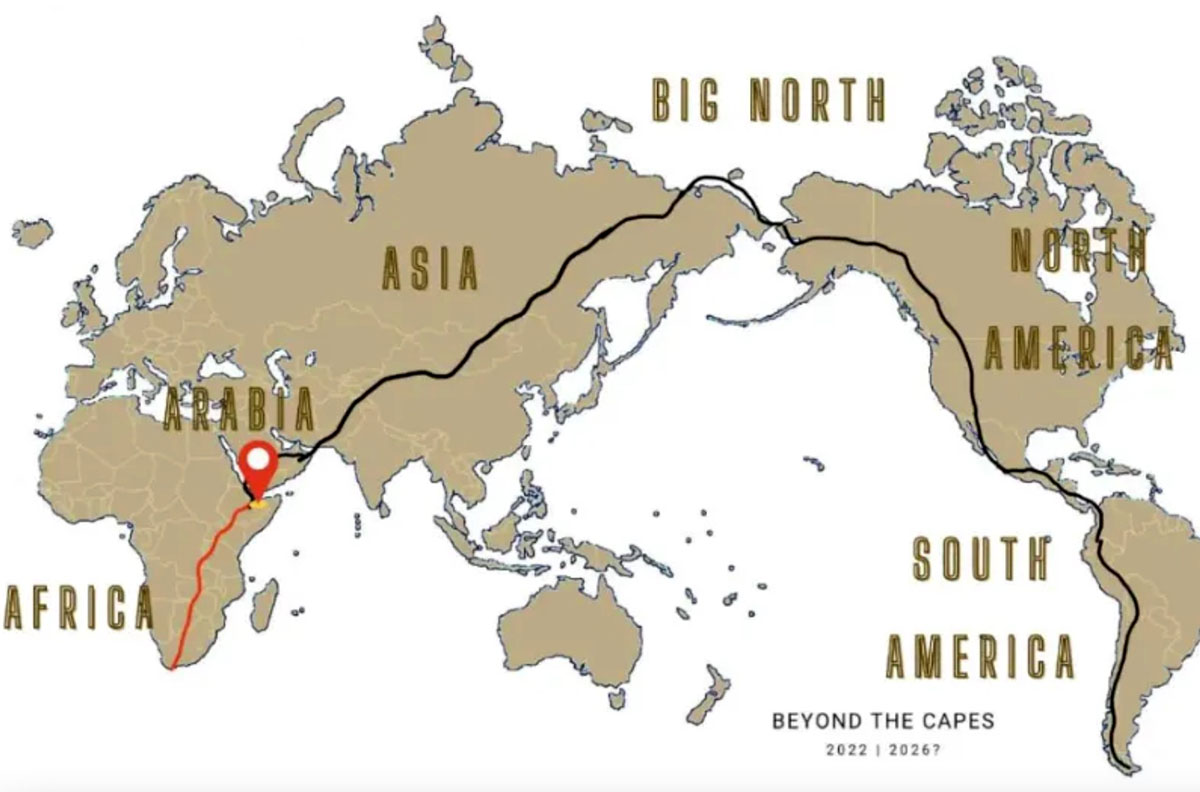 The arc of Yann Busnel’s planned trip around the world. Image: Yann Busnel

years in the making

Busnel has spent 10 years thinking about this goal. In 2010, he and his brother began brainstorming for something unprecedented.

In 2014, he had the “revelation” of daring to travel the longest land route in the world. Fast forward a few more years to 2019, and Busnel pulled the trigger, quit his job, and put plans into action.

To fund the expedition, he founded an organization of the same name, Beyond The Capes, along with several social media accounts.

So far, his “hard-won skills” from serving in the French army have helped him deal with the trials and dangers of traveling in convoluted places without motorized transport. Ethiopia has posed the toughest challenge so far, where Busnel has survived repeated attacks by locals, he told The Telegram.

Also Read :  Spain, Turkey and Greece could be too hot for holidays in 2027 with soaring temperatures | Travel News | Travel

“Ethiopia was the most complicated,” Busnel said. “I’ve been attacked several times. They stoned me and tried to take me away. I had to defend myself to save my skin.”

Busnel’s poetic and self-reflective contributions to the journey demonstrate his intent to learn as much as possible. Through his travels, he hopes to uncover insights into how indigenous people around the world often survive in hostile environments and compile them into a “scientific volume.”

“It’s important for me to understand these techniques by being in the same position as the people who need them,” Busnel wrote on his website.