A French traveler currently trying to travel the world penniless has been given a warm welcome in rural County Derry.

Charles Attonaty relied on the kindness of strangers during an adventure that began more than two years ago and took him from his native Normandy on a tour of Europe.

The 29-year-old has already been on two trips after the cancellation of a planned holiday to Thailand due to Covid in July 2020 sparked his inner wanderlust.

“One day I decided to take the road, I took some gear and a backpack around 7:40 p.m.; not even my parents knew,” he told Derry Now.

His first two trips took him to both Eastern and Northern Europe, both times with professional commitments eventually taking him back to France.

Having originally worked for Deliveroo, he had run a successful grocery delivery business, but in search of a new, more extreme challenge, he simply gave up the business and took off.

“I handed over my company to an employee; it was crazy I gave them everything. The third stage was similar; alone, no plan but no time limit now,” he said.

“I’ve been to France, Belgium, Germany, Denmark, Sweden, Finland, Norway in the winter. Sometimes it was 32 degrees below zero.

“This is my fourth step now. I was in the north of France, in Calais, telling my story to a French ferry company and they said, “That’s crazy, we’re offering you a ticket to England.”

“So I was in England, Wales and Scotland. I was at Isla and Louis St Harris and then I had the opportunity to go to Northern Ireland.”

And he took it. 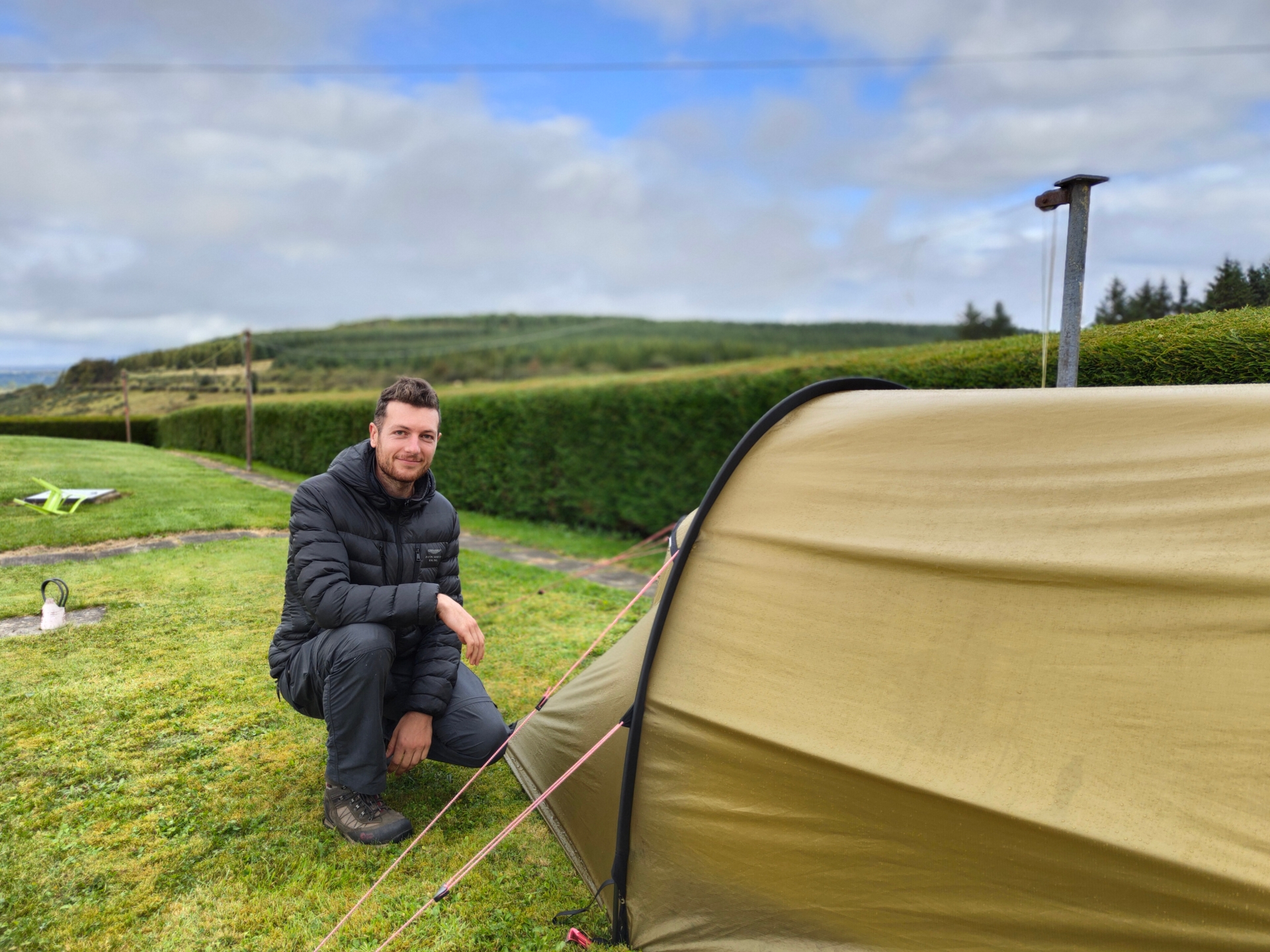 Charles has pitched his tent in Ciaran and Majella McNicholl’s garden in Glenullin, County Derry.

Arriving at 10.15pm on 10 August 2022 he met up with a friend of a man he had been staying with in Scotland who drove him to Bangor where he spent his first nights in Northern Ireland.

Also Read :  The Navy's new carrier is at sea for its first deployment

Charles has certain rules and conditions on his journey. He does not specifically ask for food or for sleeping in people’s homes. Besides, he is not allowed to work to raise money.

The French native says he “almost died” in the scorching heat of Turkey and the -32-degree depths of the Finnish winter.

And on Thursday afternoon he knocked on the door of Ciaran and Majella McNicholl in Glenullin, County Derry.

“We were doing Freddie’s homework and he overheard conversations and he and Connie thought their daddy was home,” Majella said.

“I went outside and Charles was talking to the dog outside and he just asked if he could use the toilet so I showed him where it was and went back into weaning.

“We were just talking, I was probably very curious! He said he was a French traveler or backpacker so I asked him about it.

“I figured maybe he hadn’t eaten in a while and offered him some food, made him a sandwich and he told me the madness of what he was doing.

“When Ciaran came home from work, Charles was sitting here eating spaghetti bolognese with the two weans. I never had a chance to call him and tell him anything.

“Ciaran is probably even more welcoming and friendly than I am, and when he got home he sat down and asked Charles every question I had asked him before.”

The welcome wasn’t so warm everywhere, with Charles having particular difficulties on Rathlin Island off the north shore.

“I like islands because they can be very different from the mainland and a guy offered me a ticket to Rathlin.

“I met local people, so I smiled and said ‘Hello’ but they didn’t answer. I got a lot of rejections, but that happens all the time, it’s not a problem. You can say no, but be kind; respect a person.

“It was pretty hard to survive. I have no idea what would have happened if I hadn’t had a return ticket.”

The open-ended journey has brought a number of unique experiences to the French traveler, who has traveled in a variety of vehicles along the way.

“I was upstairs, but I could have been inside. The guy had a lot of tanks that he bought from France, Poland, the USA.

“I also walk a lot; from five to ten hours a day. I hitchhike and I can sometimes sit in a taxi, a tractor, a glider, a sled, a sailboat.

“I always meet nice people. One thing that struck me is that people are connected.

“When I was in Sweden I met a local family and when I left them I was walking 500km away two days later when a lady stopped her car.

“She opened the windows and said she was carrying the doctor who invited me to Christmas. What is the probability of meeting the same family after two days and 500 km?

“At Christmas, the man had sent a picture and summed up my story in a message. I could have packed my things slowly, or she could have driven faster and I never would have met her.

“This kind of situation, with perfect timing, has happened all the time during my trip. I think the universe is trying to show me these syncs.”

Humans are conditioned to feel that a journey requires a destination, or at least a reason to travel. 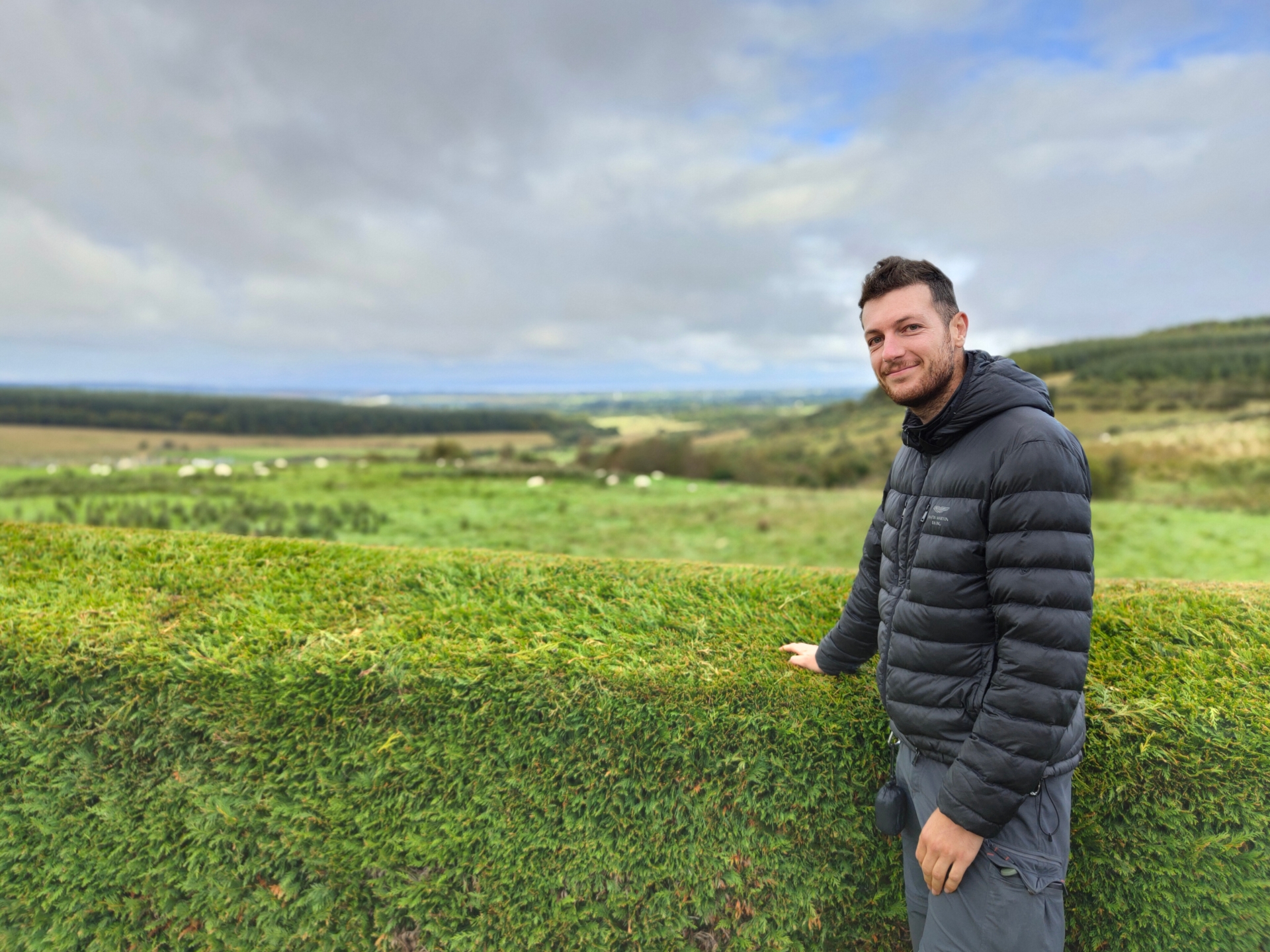 Had it not been for a canceled holiday to Thailand, Charles might never have discovered Derry’s scenic hills.

However, Charles relishes the variety of possibilities that come with simply not having an endpoint and not knowing where he’s going.

“I started with nothing; just my gear, my pass and my good energy,” he said.

“I don’t really decide the direction, I just feel it. The energy, vibration, I don’t really know. Sometimes I don’t feel it and make my way back.

“Every day is a new life for me; I don’t know who I’ll meet, where I’ll sleep or if I’ll eat. It’s an experience.

“On the road I want to sacrifice comfort and keep the difficulties high because the rewards will be high too. I really appreciate the little things in life.

“There are three options. The first is to go beyond all my borders and visit all the countries in the world. I have no idea if that is possible.

“The second is that one day I will be blocked in a country. People will ask me to pay and maybe it will be done.

“The last is that I find a beautiful country with lovely people; perhaps a beautiful lady, and I shall never come back.”

“I’m pretty sure if I had gone to Thailand on vacation I wouldn’t have embarked on this crazy adventure.”

He might never have discovered Glenullin in the first place.

Charles documents his journey on social media and has accounts on Tik Tok, Instagram and Facebook. You can follow him by searching @tourdumondesansargent – a translation of “World Tour Without Money”.