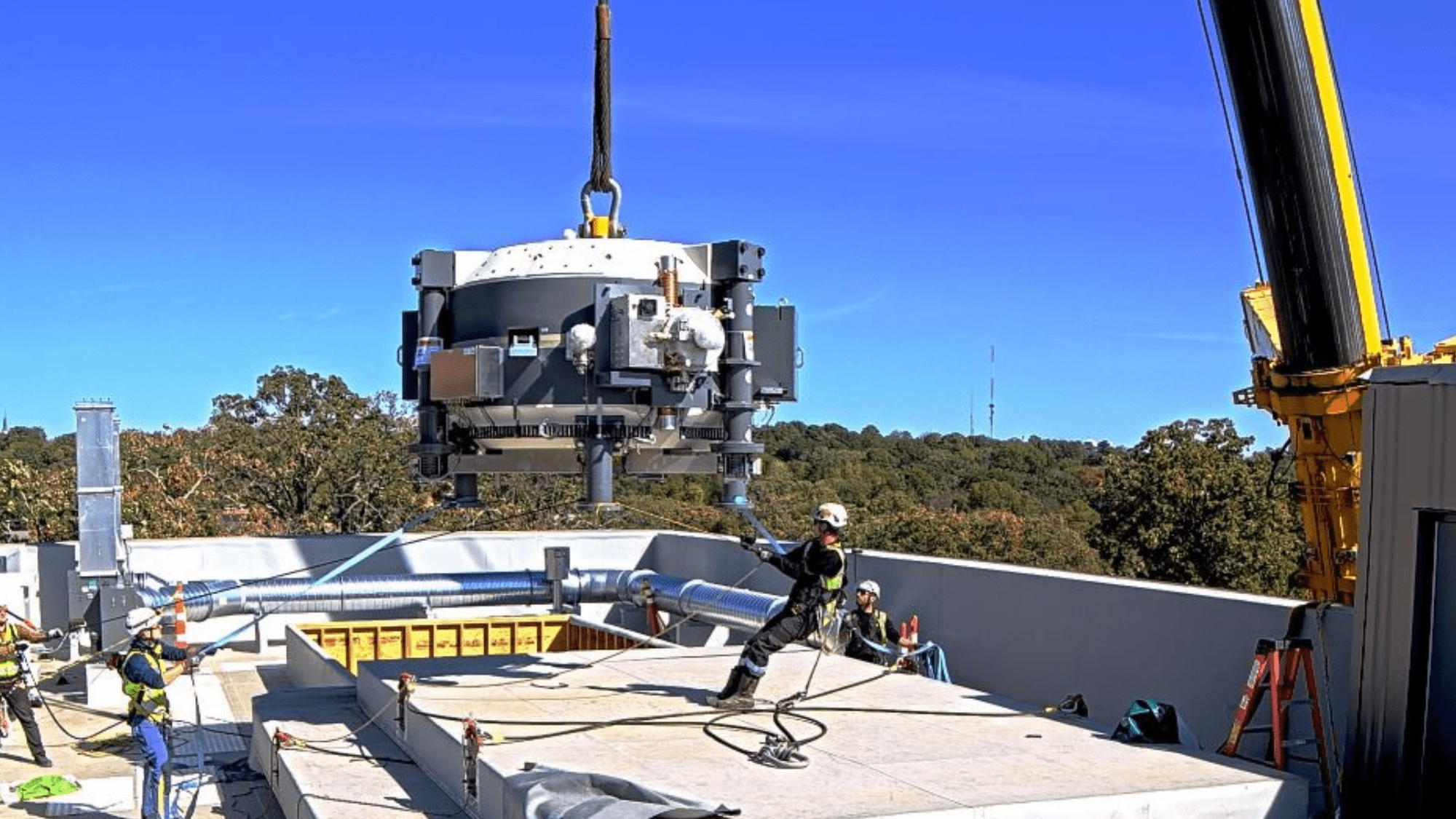 Workers from Kinco Construction and Proton International carefully position the 55-ton cyclotron before lowering it into an underground vault. Once installed, the cyclotron will power the proton energy beam that will deliver highly targeted proton radiation to cancerous tumors.

October 20, 2022 | The completion of an expanded $65 million University of Arkansas for Medical Sciences (UAMS) Radiation Oncology Center that will house Arkansas’ first proton center marked October 20 with the arrival and installation of the proton center’s cyclotron, a kind of particle accelerator, an important milestone serves as a key device.

“UAMS is proud to partner with Arkansas Children’s, Baptist Health and Proton International to bring this breakthrough technology to Arkansas,” said UAMS Chancellor Cam Patterson, MD, MBA. “Arkansans no longer need to travel out of state to receive this innovative treatment.”

Located at 3900 W. Capitol Ave. The Proton Center of Arkansas, under construction, will offer an advanced form of radiation treatment that uses precisely focused protons to target tumors, rather than photons used in standard X-rays.

While both forms of radiation kill cancer cells, proton radiation is more effective in treating some types of cancer, particularly those in close proximity to critical organs for which conventional radiation can be too toxic. Proton beams can be aimed precisely at the target and deliver most of their energy directly into a tumor with minimal damage to surrounding healthy tissue. For patients, this means fewer and less serious side effects, faster recovery times, and an overall better quality of life.

“The realization of proton therapy in Arkansas demonstrates our commitment to bringing the most advanced cancer treatments to Arkansas,” said Michael Birrer, MD, Ph.D., director of the Winthrop P. Rockefeller Cancer Institute of UAMS and Vice Chancellor of UAMS. “For patients with tumors that are difficult to treat with conventional radiation, proton therapy could be life-changing.”

Proton radiation is ideal for pediatric patients with certain types of cancer because it limits the total radiation exposure to healthy, growing tissue. The UAMS Radiation Oncology Center is the only one in the state that treats children.

“This collaboration advances healthcare and will enable Arkansas Children’s pediatric cancer patients to receive proton therapy in their home state,” said Marcy Doderer, FACHE, President and CEO of Arkansas Children’s. “This is another exciting step toward providing state-of-the-art, community-based care for Arkansas’ children.”

Including UAMS, proton centers exist in only 41 locations in the United States. 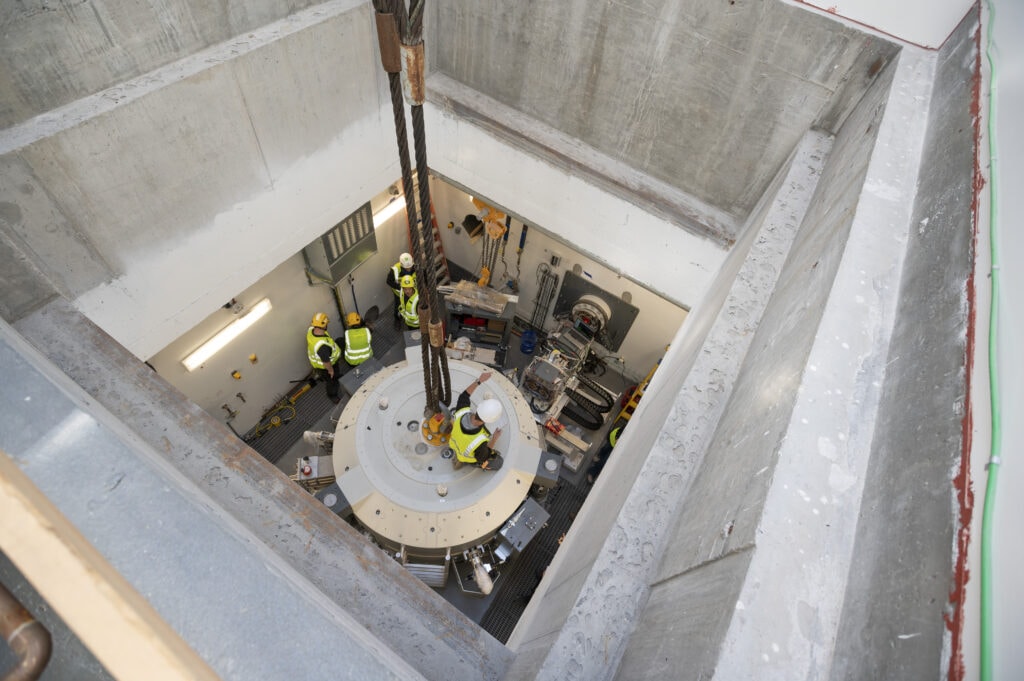 Workers secure the cyclotron in the underground vault, where the 6-foot concrete walls protect against radiation exposure when the proton beam is operational. Image by Evan Lewis.

The 55-ton cyclotron that powers the proton beam made an eight-week journey across the country to Little Rock. The sophisticated device, which includes the center’s 75-ton gantry, left Brussels, Belgium, on August 25 and was at sea for five weeks before landing in the Port of Houston on September 26. The equipment is so massive that it requires a police escort and a convoy of six tractor-trailers to transport it safely to Little Rock. Installation is expected to take 10 months.

Construction began in May 2021. The proton center is expected to begin treating patients in September 2023.

“This is another example of how strategic collaboration with other leading healthcare providers can improve the health of Arkansas residents,” said Troy Wells, President and CEO of Baptist Health. “We are excited to bring this therapy to the state, and this delivery of the cyclotron brings us one step closer to delivering the best cancer care here in Arkansas.”

“The Proton International team is excited to be working with such respected partners to bring proton therapy to the citizens of Arkansas and beyond. It is imperative that certain patients have access to this life-saving technology close to home,” said Chris Chandler, CEO of Proton International.

The Radiation Oncology Center, part of the UAMS Winthrop P. Rockefeller Cancer Institute, already offers state-of-the-art technologies for the latest radiation treatments. It will continue to offer these services, as well as new services, using the expanded capabilities of three new linear accelerators when it moves to a new 52,249-square-foot building in 2023.

“With the addition of state-of-the-art proton therapy and most importantly, our compassionate and experienced clinical team, we will provide our cancer patients with the most advanced and comprehensive care in the state of Arkansas,” said Fen Xia, MD, Ph.D., chair of the UAMS Division of Radiation Oncology .

Also Read :  Marcos distances from father’s legacy on US trip

The three new linear accelerators—machines that adjust high-energy X-ray beams—offer edge radiosurgery, a specialized non-surgical technique used to destroy tumors in the brain and spine with an end-to-end accuracy of less than 1 millimeter; Motion-managed radiation therapy, which controls radiation directed at tumors that move as the patient breathes; and adaptive therapy, the most advanced form of cancer treatment that allows doctors to adapt to daily changes in the shape and position of the tumor over the course of treatment to better target the cancer and spare normal tissue.

A consulting room, a computed tomography (CT) room, treatment rooms, clinic rooms, an examination area, a staff lounge and a conference room as well as several medical practices in the clinic area will be housed on the ground floor of the new building.

The proton machine will be housed on the second floor, as well as a CT room to prepare patients for proton therapy, a high-dose radiation (HDR) room, changing rooms, recovery rooms, an anesthesia room, work rooms, eight examination rooms, a large work room for physicists and other medical practices.

The third floor will house a cold room for the proton engine, as well as engineering and storage areas. It will include some extra space for future needs. An enclosed heated and cooled skywalk will connect the building to UAMS Parking Level 3.