In recent months, much of Asia – like many other parts of the world – has returned to an eerie normalcy. The streets are packed with people, schools and universities are open, traffic clogs the streets, shops are busy and there is little to no social distancing. COVID-19 restrictions have been lifted in most Asian countries, with mask requirements and minor restrictions on international travel being the common thread that reminds us of the past two and a half years.

In retrospect, it would have been far worse for many of Asia’s poorer countries. Much of Asia — including India, Indonesia, the Philippines and Vietnam — falls into what the World Bank classifies as “lower-middle-income countries” (LMICs), where citizens earn between $1,000 and $4,000 a year on average. Despite their cultural, social and political diversity, Asia’s LMICs share several governance challenges, particularly in relation to institutional capabilities, the quality of policy making and implementation, and the quality of services provided to citizens.

While the economic shock of COVID-19 has been immense across Asia – with over 9 million jobs lost and 4.7 million people pushed below the poverty line in Southeast Asia alone – much of the region is recovering with vigour. Estimates by the Asian Development Bank and others are for a return to economic growth across the region after the 2020-2021 slump. 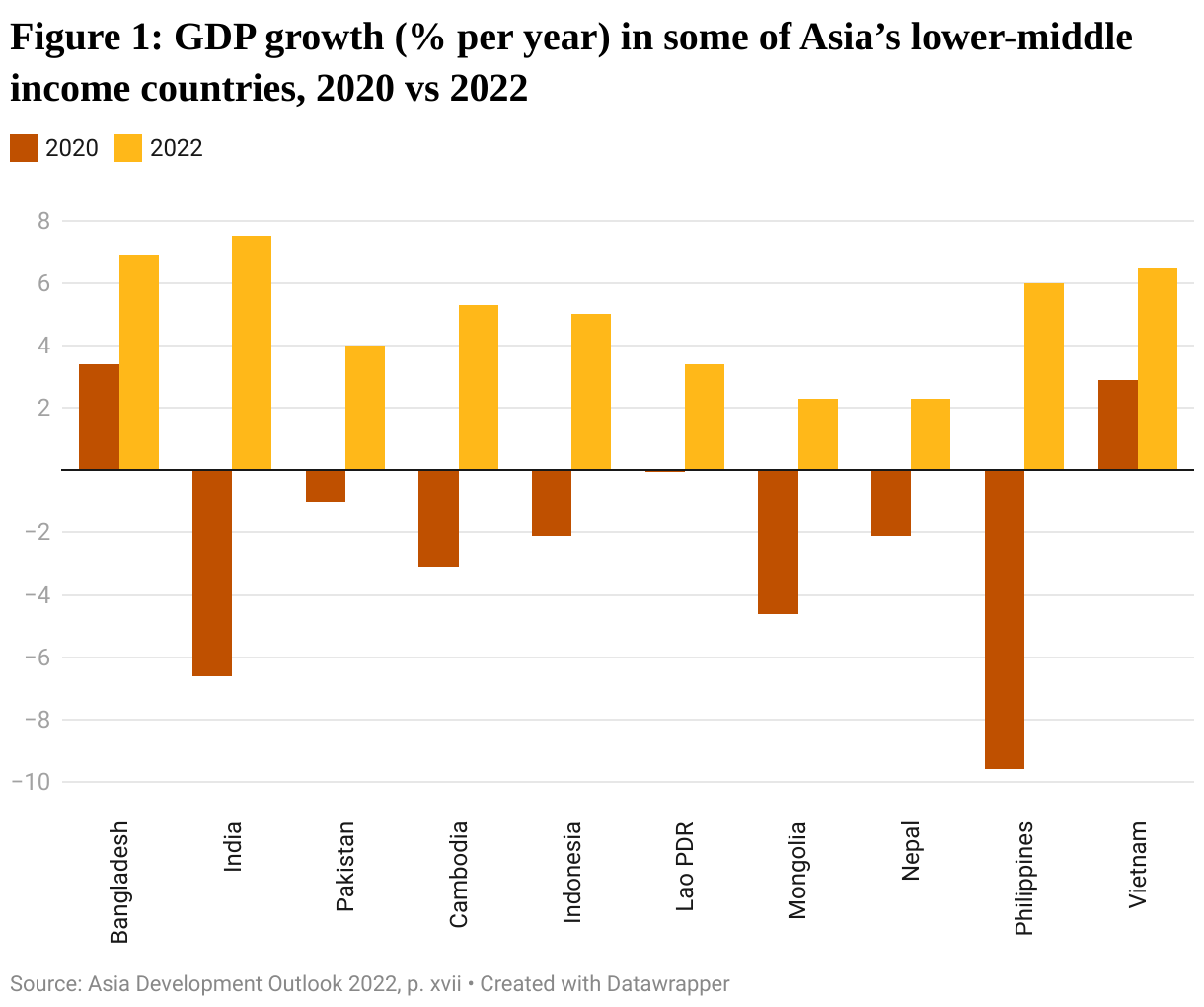 A key driver was the generally very well orchestrated, government-led vaccination programs. At the time of writing, 72% of the Region’s population has completed the first vaccination protocol, compared to 67.5% in the United States and 66.2% in the European Union. Once they secured vaccine supplies, governments acted quickly and efficiently to bring them to the citizens.

In our latest issue of the GovAsia – “Rollout: Reflections on COVID-19 immunization programs in lower-middle-income Asia” – We look at how governments have rolled out massive vaccination campaigns across much of LMIC Asia in 2021. Notwithstanding the vast social, cultural, and political differences between countries such as India and Laos, or Pakistan and Vietnam, we have noted some commonalities in the achievements and challenges they have faced in implementing immunization programs.

First, deep inequalities in the global distribution of vaccines in 2021 caused shortages in all but the richest countries, the knock-on effects of which were significant. These were largely due to patent restrictions, meaning only India could produce vaccines in-house, while other Asian LMICs relied on imports. With much of the global supply purchased and countries like Canada procuring many times more than needed to meet their populations’ needs, a waiting game set in across the region in early to mid-2021. In some countries like Vietnam, vaccine supply only started to keep up with demand late in the year.

Second, most LMICs have struggled with national rollout programs due to a combination of factors such as: B. elite registration of vaccinations, under-the-counter distribution, unclear policies, and a lack of national and local government coordination. These challenges have been compounded by corruption scandals across the region, which have damaged public confidence and contributed to an unfair distribution of vaccines. In Nepal, a vaccine procurement scandal led to the suspension of vaccine rollout in January 2021, leaving some people partially vaccinated and many more vaccine-free.

Third, several LMICs struggled to administer vaccinations fairly and efficiently, despite identifying all as priority groups at the beginning of their campaigns. Throughout 2021, the tendency to prioritize economic considerations over health concerns intensified, further hampering the effectiveness of vaccination campaigns. Rural communities in Indonesia and India have been vaccinated significantly more slowly due to a range of issues including reduced smartphone access, digital illiteracy, poor internet connectivity and hesitant vaccination.

Finally, several LMICs are struggling with some degree of vaccination hesitation, although notably not nearly as large as the anti-vaccination movements seen elsewhere in the world. In India, Nepal and the Philippines, mRNA vaccines were initially considered safer than non-mRNA vaccines, particularly those in the latter category made by China. This made things difficult for Asian LMIC governments in 2021 when only non-mRNA vaccines were available. Across the board, vaccine hesitation has largely been caused by the spread of disinformation across social and other media platforms.

Many challenges remain as immunization programs continue in Asian LMICs. These are underpinned by a number of governance challenges, including corruption, failure to further strengthen health system capacity, and poor coordination between national and local government agencies, civil society, the private sector and other stakeholders.

Efforts to respond to COVID-19 have pointed to a combination of priority local, regional and global actions that will ensure Asian LMICs are better prepared for future pandemics or other major challenges.

The pandemic has highlighted how low- and middle-income countries need quality universal health systems with strong emergency response capabilities, backed by efficient and effective governmental systems and structures. In addition, there is a need to invest more in the local production of anti- and long-term COVID treatments and take action to increase access to digital health services, especially for marginalized and disadvantaged groups.

The dynamics of cooperation generated by the pandemic offer opportunities for regional knowledge and technology exchange on pandemic management and strengthening the health system. At the same time, there is more to learn from the experiences – both successes and challenges – of Asian LMICs, some of which have consistently outperformed wealthier countries and regions in their response to the pandemic, including vaccine rollout.

The upcoming G20 meeting in December 2022 is an important opportunity to strengthen solidarity regionally and internationally. Where efforts to improve global pandemic preparedness and response are already on the table, these must address not only the improved testing and therapy, research and development, manufacturing, and health infrastructure needed to combat COVID-19 or future pandemics, but also the characteristics of the governance contexts in which actions are implemented and the underlying systemic challenges that also need to be addressed.

This post is part of a collaborative series with The Asia Foundation.

Travel to Rome, Costa Rica, Japan or Bali with SBCC to study abroad – The Channels

If You’re Flying With Presents, Be Sure to do This

‘Why I fell in love with Tanzania’

Apply for Indian visa from UK India is one of the most desirable travel destinations for British citizens due to its rich and vibrant culture. Not to mention her cuisine,…