The government of Indonesia has made the development of the country’s special economic zones (SEZ) a priority policy with the goal of attracting over US$50 billion in foreign investment over the next decade, especially for SEZ-oriented manufacturing.

As of 2022, there are 19 SEZs of which 12 are in operation and the rest in the construction phase. Eight are designated for tourism with the rest for manufacturing and processing. The concept of SEZs in Indonesia was only announced in 2014 when President Joko Widodo came to power. Buoyed by the success of the country’s free trade zones, SEZs were developed to further increase foreign investment in the country. As such, the first SEZs in Indonesia have only been operational since 2015, with the majority only in 2019.

In establishing the SEZs, the government tried to diversify away from the island of Java and spread across the country. As of 2021, Indonesia’s SEZs have attracted just over US$5 billion in investment and employed over 28,000 workers.

The SEZs serve as hubs for selected activities from logistics, to export processing activities, to tourism. They are designed in this way to maximize the ready availability of local resources and cater to upstream and downstream industries. For example, the Arun Lhokseumawe SEZ, in Aceh province, has its primary activities around petrochemicals, oil and gas, and paper production. The province is known for its large resources of oil and gas. The Mandalika SEZ, on the scenic island of Lombok, is being pushed as an SEZ that supports eco-tourism and agro-industry.

Further, the Kendal SEZ has its primary activities in manufacturing, especially garments and textiles, automotive furniture, electronics, and food and beverages. The SEZ is located in Central Java province, one of Indonesia’s main manufacturing hubs.

Within an SEZ, the following business activities can be carried out:

Investors operating in Indonesia’s SEZs will find that they are supported by well-integrated infrastructure of highways, drainage systems, high-speed internet and communication systems, ports and airports. In addition, the Indonesian government has a Range of fiscal and non-fiscal incentivessuch as an easier immigration process, reductions in corporate tax, and exemptions from import duties and excise duties, among many others.

For foreign investors, to enter the special economic zones of Indonesia and taking full advantage of what they offer requires a long-term outlook. Companies must first ensure that their industry is suitable for the infrastructure and benefits provided in SEZs, as well as understand the long-term domestic and regional policies that could affect their industry. 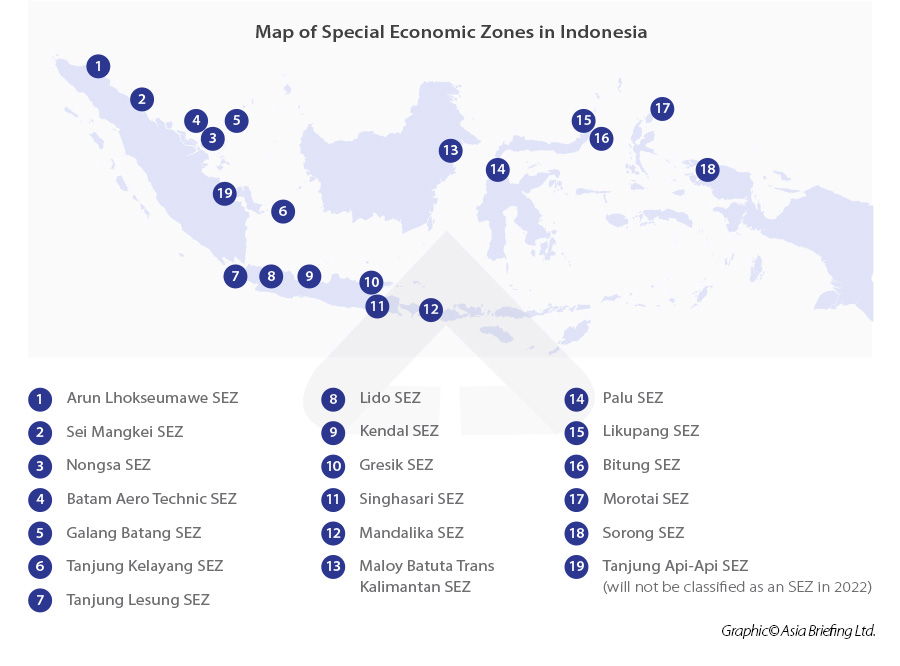 Diversification away from Java

Indonesia’s special economic zones are across the vast archipelago with the aim of stimulating equal economic growth. Until the year 2000, centralization and economic development policies were centered on Java and the country’s capital, Jakarta (also in Java).

Java is supported by a strong consumer base as the island accounts for about 60 percent of the total population of Indonesia – it is the most populous island in the world (with over 141 million people). This also means that Java accounts for 60 percent of the country’s GDP. Furthermore, Java has the most developed services sector in Indonesia and more than half of the country’s 100 or so industrial areas are on the island.

After Java, the biggest contributor to Indonesia’s GDP was the island of Sumatra (about 21 percent), followed by Kalimantan and Sulawesi (eight and six percent). Bali and Nusa Tenggara contributed three percent to the GDP, while Maluku and Papua, the other two percent. The majority of Indonesia’s manufacturing sector is also located in Java, with West Java province accounting for 60 percent of the country’s manufacturing activities.

The main thrust on national growth has come from the provinces outside of Java, as they are heavily dependent on commodities processing and extraction industries, such as oil and gas, nickel, tin, palm oil, and coal.

This overreliance on commodities means that these provinces are vulnerable to global price shocks, such as when the government began banning the export of unprocessed goods in 2014, and when commodity prices plummeted at the start of the COVID-19 pandemic. As a result, supporting businesses related to commodity extraction, such as transportation, were also affected.

Since coming to office, President Joko Widodo and his government have emphasized a regional development strategy with a focus on investments in roads, ports, railways and power plants; Head of the development of special economic zones. In his second term, the president plans to spend more than US$400 billion by 2024 on a variety of infrastructure projects that will help integrate the country more effectively.

The development of SEZs can also stimulate regional administrations to take measures to improve the local business environment, such as reducing corruption and improving healthcare and education. These are important steps that support long-term growth.

How the government implements its infrastructure plans and SEZ development will be vital to not only reduce economic dependence on Java, but also help Indonesia shift its shift from raw materials to processed goods.

The development of Indonesia’s special economic zones will be vital in pushing the country’s 4.0 Industrial Revolution (4IR) roadmap. The 4IR Roadmap, also called “Making Indonesia 4.0”, was first announced by President Joko Widodo in 2018 and outlines the government’s plans to transform the country’s manufacturing sector into a higher quality future with the capacity for some 10 million new jobs to be added. The industry contributed the most to the national GDP, with 17.34 percent (in 2021).

The Making Indonesia 4.0 roadmap focuses on five key sub-sectors of manufacturing. These are:

Through Making Indonesia 4.0, the government hopes to improve its net export-to-GDP from one percent to 10 percent by 2030 and increase the contribution of the manufacturing sector to GDP to 25 percent in the same year.

In addition to the five focus sectors, there are 10 national priorities for achieving the goals of Industry 4.0. These are: 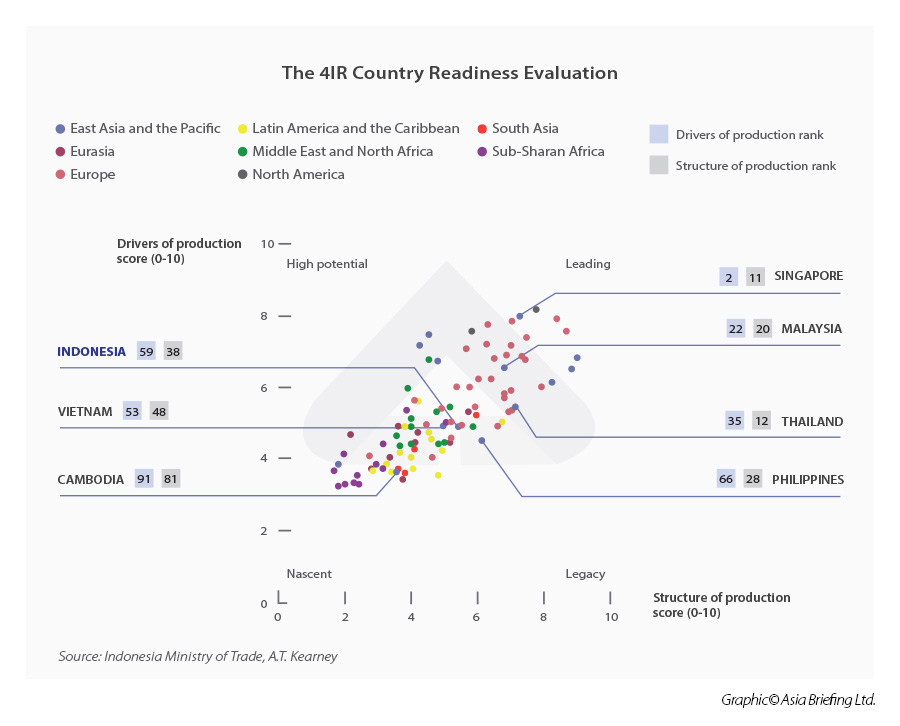 Compared to other ASEAN states, Indonesia, along with the Philippines, Cambodia and Vietnam, are still in the planning phase of their 4IR strategies. Singapore is leading the pack in 4IR adoption, focusing on reshaping its workforce and transforming its industries. Singapore will invest over S$3 billion (US$2.1 billion) in manufacturing and engineering towards this goal.

ASEAN Briefing is produced by Dezan Shira & Associates. The company assists foreign investors throughout Asia and maintains offices throughout ASEAN, including in Singapore, Hanoi, Ho Chi Minh City, and Da Nang in Vietnam, Munich, and Essen in Germany, Boston, and Salt Lake City in the United States, Milan, Conegliano, and Udine in Italy, next to Jakarta, and Batam in Indonesia. We also have partner companies in Malaysia, Bangladesh, the Philippines, and Thailand as well as our practices in China and India. Please contact us at [email protected] or visit our website at www.dezshira.com.